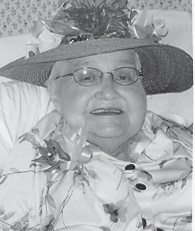 Funeral services for Madge H. Combs, 87, were held March 28 at the Graham Memorial Presbyterian Church in Whitesburg. Burial was in Green Acres Cemetery at Ermine.

Born in Letcher County, she was a daughter of the late Benjamin and Rachel Adams Harrison and was married to the late Forester Combs. She was preceded in death by Dave M. Jones.

Mrs. Combs died March 26 at Letcher Manor Nursing Home. She was a member of the Millstone Missionary Baptist Church, the Hester Chapter #54 Order of the Eastern Star for 63 years, the Whitesburg VFW Ladies’ Auxiliary, and the Cowan Homemakers.