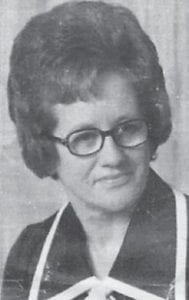 A daughter of the late William F. and Sally Ann Holbrook Day, she was the widow of Roy Collins, and later married Wiley Polly, who survives her.

She was a sister of the late Mildred Hodge.

She was a member of the Millstone Missionary Baptist Church, and had worked at Dawahare’s for 25 years.