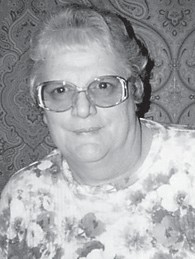 A daughter of the late Tip and Annie Caudill Delph, she was married to Joe Howell, and later married John Steele Jr., who preceded her in death.

She was a home health aide at Karen Quinlan Hospice Center, and at the Juvenile Office of Sussex County Juvenile Detention Center for 20 years.

Funeral services were held June 17 at Everidge Funeral Home in Whitesburg. Burial was in Caudill Cemetery at Whitco.