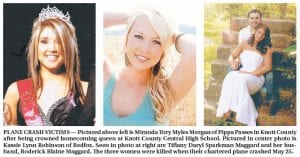 Funeral services for the fourth victim of a plane crash in the North Carolina mountains will be held in Hindman tomorrow (Thursday).

Miss Morgan is one of three women described “as a true asset to the community” who were returning home to Knott County from a Southern excursion when they were killed when the twinengine plane they had chartered crashed May 25 in the remote community of Unaka, N.C., located about 125 miles west of Asheville.

Right before the crash, the pilot of the 1976-model Beech Baron 58, 27-year-old Matthew Shuey, reported a fire on board. The plane, on its way from Georgia to Hazard, then crashed. Shuey, a native of Nicholasville, also died in the crash.

The other two passengers from Knott County were 23-year-old Tiffany Daryl Sparkman Maggard of Stinnett and 22-year-old Kassie Lynn Robinson of Redfox.

Funeral services for Mrs. Maggard were held Monday in Pippa Passes. The funeral for Miss Robinson was held Tuesday morning in Hindman.

“They were just beautiful young ladies that were a true asset to the community,” said Knott County Judge-Executive Randy Thompson. “People in the county are devastated by this loss because they are role-model citizens that we’ve lost.”

The women had traveled to Alabama for a weeklong trip that included visiting a friend, said Miss Morgan’s cousin, Amy Campbell.

National Transportation Safety Board spokesman Peter Knudson said that Shuey had communicated with air traffic controllers in Tennessee at about 4:12 p.m. on May 25, about a half-hour into the flight while cruising at an altitude of 9,000 feet.

About 30 seconds later, Shuey contacted them again to declare an emergency, indicating there was a fire without specifying its location, Knudson told reporters. That was his last radio transmission.

Authorities in Cherokee County, N.C., were notified of the crash minutes later in a mountainous, wooded area.

“One witness reported seeing the aircraft about 1,500 feet above the ground … in level flight before it rolled to the right and then went almost straight down,” Knudson said during a conference call.

The crash caused a fire that burned about five acres.

The NTSB dispatched a fire specialist to the scene to help determine which fragments of the wreckage were damaged by fire and heat before the crash, Knudson said.

“ We have some important pieces of information but there’s a great deal left to fill in,” he said.

Someone living near the crash site reported to 911 that the explosion sounded “like a sonic boom,” according to WKYT-TV in Lexington. The woman didn’t witness the crash but saw smoke and fire, according to the transcript.

The plane was registered to Aero Resources Corp. of Hazard, where Shuey was employed.

Monette, president of Aero- Tech Inc., said Shuey was “the kind of pilot that every pilot would want to be, and the kind of person every parent wished they raised.”

Shuey was a flight instructor at Aero-Tech for about a year and a half before becoming a charter pilot in Hazard, Monette said.

A memorial service for Shuey was held Sunday night in Lexington.

Miss Robinson was a biology major who recently graduated from Alice Lloyd College, said her grandmother, Dorothy Robinson. Her granddaughter, a high school cheerleader, aspired to become a physical therapist and was looking at schools, she said.

“She loved life and everything about it,” Dorothy Robinson said.

Miss Morgan had just finished her sophomore year at Alice Lloyd, where she was an elementary education major, Campbell said. She had planned to tutor children this summer at a learning center in the Appalachian county.

Miss Morgan was a standout student and a cheerleader in high school and college, her cousin said.

“She was just perfect,” Campbell said.

Mrs. Maggard, who was born in Whitesburg in January 1988, had married last year and was living in Leslie County, where she was studying physical therapy, said her aunt, Sandra Slone.

“She was always smiling,” Slone said. “If you knew her, you had to love her. She was just a sweet person.”

“The entire campus is mourning the loss of these three outstanding young women,” the school’s statement said.

Miss Morgan was a daughter of Robert F. Morgan and Buffy Johnson Morgan and Verna Johnson Campbell and the late Kenneth Ray Campbell.

Mrs. Maggard was a daughter of Phillip Darrell and Maylynn Sparkman of Pippa Passes. She was married to Roderick Blaine Maggard.

Miss Robinson was a daughter of Ronald Dean Robinson and Sondra Robinson.