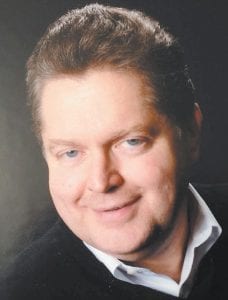 Born in Hazard in May 1954, Breeding, a graduate of Whitesburg High School and Transylvania University, was a son of the late Van Blain and Joy Wray Frazier Breeding, formerly of Isom.

Since January 2013, Breeding, a certified public accountant, had been the principal partner of the Lexington accounting firm Breeding, Henderson & Horde PLLC. He was a partner for many years in the former accounting firm Dulworth, Breeding & Karnes.

Breeding was a deacon at Calvary Baptist Church in Lexington and was an active member of the Hope Center Board and One Parent Scholar House.

The funeral service was held at Calvary Baptist Church. Burial was in Lexington Cemetery.

“During Randy’s younger years, his hobbies included band, in which he played the coronet and trumpet,” brother Van Breeding, a Whitesburg physician, remembered in a eulogy he prepared with his wife Pauletta and delivered at Monday’s service. “He also enjoyed playing basketball.”

“ High school proved to be a very busy time for Randy,” the eulogy said. “He continued his love of music by playing in both the Whitesburg High School Marching and Concert Bands. He also played basketball for two years. He earned extra money by playing TAPS at funerals for local veterans. While still in high school, Randy started working for his Great Uncle Russ Collins who owned Collins Lumber Company. Russ’s health was failing and Randy did what he could to help. Soon it was evident that Randy’s superior mathemathic mind and the lumber business were a perfect match! He helped his Uncle Russ build a successful business. This was Randy’s first ventue into the world of business and it only made his dreams grow!”

Dr. Breeding told mourners that “academics was a very serious matter in the Breeding household” and that “Randy spent many hours to ensure he was at the top of his class.”

“His mother and grandmother had both been valedictorians of their senior classes and no less was expected of him,” said Dr. Breeding. “He didn’t disappoint.”

In addition to being class valedictorian at Whitesburg High, Randy Breeding was voted by his senior classmates as “most likely to succeed,” “Mr. Whitesburg High School,” and “Mr. Yellowjacket.” He also was selected to all-state band and won the school’s John Phillip Sousa Award.

“I counted at least 15 of his classmates that had traveled from eastern Kentucky to say goodbye to their dear friend,” Dr. Breeding said. “To me that is amazing. They think a lot of him today and they thought a lot of him then.”

“Randy was a wonderful family man, a faithful and loving husband, a fun a selfless father,” Dr. Breeding rememberd. “He was an excellent provider and loved to spend time with his family whether at their sporting events or cheering on the University of Kentucky Wildcats.”

Dr. Breeding also remembered that his brother’s favorite song was “Joy to the World,” written by Tom T. Hall and made into a hit single by Three Dog Night. Noting that Randy liked to whistle the song because he couldn’t sing the words “Jeremiah was a bullfrog,” Dr. Breeding said that Randy “lip-synced in church.”