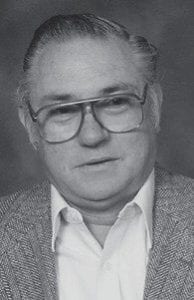 He was a U.S. Navy veteran of World War II, and was a manager of the A&P grocery stores in Neon and Harlan. He also worked at the Quillen Rexalls in Whitesburg and Neon before he and his wife purchased the drugstore in Neon. After selling the drugstore in the early 1980s, he worked in the produce department at Rowlette’s Shopwise.

Adams was a member of the Neon Volunteer Fire Department and later served on its board of directors. He also belonged to the Neon Community Lions Club and was a committee chair for the eyeglass project. He was a mem- ber of the First Church of God.

Funeral services were held September 2 at the Neon First Church of God. Burial was in the Reynolds Cemetery at Seco.