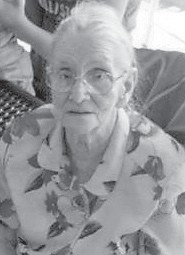 Vesteen Holliman, 86, died February 1 at her home at Irvine.

A daughter of the late Steve and Verna Lee Caudill Adams, she was preceded in death by a son, Ernest Jr.

Funeral services were held February 4 at the Mount Olivet Old Regular Baptist Church. Burial was in the Horsemill Point Cemetery.