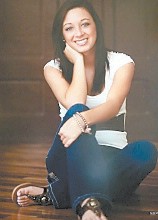 She was born in Hyden to Gordon and Darlene Blair of Redfox, and the late Brian Hughes, and “special parents” Jean and Randy Day.

Mrs. Hicks had formerly worked at the Hazard ARH Cancer Center, and was studying to be a physician’s assistant.

Funeral services for Mrs. Hicks were held July 10 in Hindman. Burial was in the Noah Jent Cemetery at Redfox.