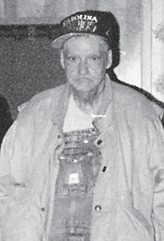 Funeral services for Dow Sexton, 82, of Colson, will be held at 1 p.m. today (Wednesday) at Letcher Funeral Home in Whitesburg. Burial will follow in the Gibson family cemetery at Colson.

A son of the late Hasadore and Elizabeth Sexton, he died December 25 at Hazard Appalachian Regional Hospital.

Sur viving is a sister, Ruth Southwood of Whitesburg.