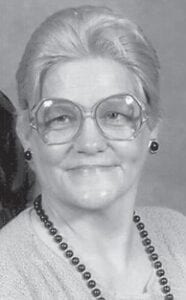 Funeral services for Mollie Sue Hall, 84, of Hemphill, will be held at 2 p.m. today (Wednesday, August 12) at Letcher Funeral Home. Visitation will be at 11 a.m. today at the funeral home. Burial in the Hemphill Cemetery will follow the services.

A daughter of the late J.W. and Maymie Peterson Berry, she was the widow of William Buddy Hall. She died August 10 at Whitesburg Appalachian Regional Healthcare Center.

Mrs. Hall was a member of the Hemphill Church of Christ.