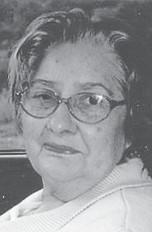 Funeral services for Geneva Combs, 76, will be held at 1 p.m. today (Wednesday) at Everidge Funeral Home. Burial will be in the Douglas Day Cemetery in Whitesburg.

A daughter of the late John Doyle and Virgie Cooper Burke and a sister of the late Lorraine Hall, she was born in Pennington Gap, Va. She died January 2 at Whitesburg Appalachian Regional Hospital.

She was the widow of Clyde Isaac Church and later married the late Jack Combs.