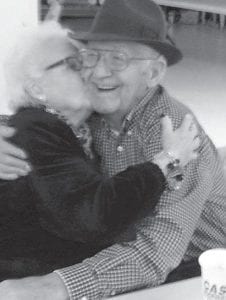 Funeral services for William “Bill” Blair, Jr., 98, will be held at 11 a.m. today (September 4) at the Fleming Neon gymnasium in Neon. Burial will follow at the Potter Cemetery in Kona.

Born in Thornton to the late William L. Blair, Sr., and Hattie Jane Franklin Blair, he died September 1 at his home in Jackhorn.

He was the widower of Mora Louise Carroll Blair.

He was a U.S. Army veteran and in World War II he had participated in the invasion at Normandy.

Mr. Blair was a member and served as treasurer of the Little Rock Old Regular Baptist Church, and was awarded medals in the Senior Olympics.

A member of the American Legion, he was an avid Letcher County sports fan.

Mr. Blair was preceded in death by his son, Jack R. Blair, and two brothers and two sisters.