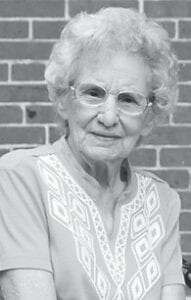 She was born in Pound, Virginia, on July 28, 1927, to the late Harlan and Elsie Mullins Sexton. She was a retired nurse and a member of Bethel Old Regular Baptist Church.

In addition to her parents and husband, she was preceded in death by her son, Michael Webb; son-in-law, Alvin Wallace Stults; and daughter-in-law, Kay Webb.

Graveside services will be at 1 p.m., today (Wednesday, September 23) at John Wright Cemetery in Pound, Va.