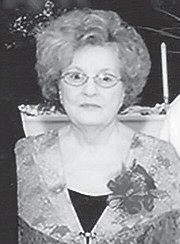 Funeral services for Lois Marie Holbrook, 72, will be held at 11 a.m. today (Wednesday) at the Cornerstone Church at Ermine. Burial will be in the Sam Bentley Cemetery at Payne Gap.

A daughter of the late Morgan Tenneson and Ada Grimes Elkins, she was born in Jenkins. She is survived by her husband, Franklin D. Holbrook Sr. of Rutledge, Tenn.

Mrs. Holbrook was a founding member of the Cornerstone Church, and had spent the last nine years in Tennessee working at the Greenlee Campground at Maysprings.