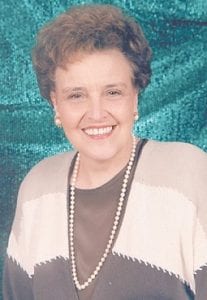 Funeral services for the founder and past chief executive officer of Mountain Comprehensive Health Corporation will be held today (Wednesday) at Whitesburg First Baptist Church.

Lois A. Baker, 79, of Whitesburg, died after a long illness on June 27 at Letcher Manor Nursing Home, where she was a patient in the rehabilitation unit.

Before helping Mountain Comprehensive Health become one of the country’s most successful rural health providers, Mrs. Baker worked in the coal business and operated a furniture plant.

“She had an opportunity to apply for some federal contracts for making furniture for the military,” son L.M. “Mike” Caudill, who succeeded his mother as CEO of MCHC, said of her time at the furniture plant. “To be able to serve those (contracts), she called upon her father, Bill Adams, who was a contractor, to build a small factory at Jeremiah.”

The business expanded in 1968 when the government contracts increased from $1 million to $2 million. A larger facility, in which 125 people were employed, was built on the Natt Combs farm above Isom.

As a result of her involvement with Letcher Manufacturing Co., she was named Small Businessman of the Year by the Small Business Administration in 1968.

“She competed in a man’s world as an equal and she was successful in several diff erent forms,” said Caudill.

“The person over it at that time failed to get the company going and was ousted and she was hired,” said Caudill. “With the help of (U.S. Rep.) Carl D. Perkins they were able to keep it from being defunded and got a $1 million grant in 1971 and in 1972 the first clinic started.”

The first clinic was at located in Wooten on the Perry/Leslie County line.

“Structurally it was a trailer left over from a government program that was set up and secured together and a common roof put over them”,” said Caudill.

“Her vision was to be able to provide affordable, quality health care to the citizens and visitors of this area,” said Caudill. “She wanted to do this with local people. She worked hard to make sure that every qualified person from the mountains had the opportunity to become a doctor.”

Caudill said Mrs. Baker was a very active player in the development of the health delivery system, not only in Letcher County but on the state and national level.

Caudill wants his mother to be remembered “as an icon in the health movement in Kentucky and the nation that has taken place over the last 30 years.” Caudill said his mother taught him “to not be afraid to dream but to be practical and realize reaching your dreams means hard work and perseverance.”

“She always had a vision and she never lost that vision,” said Anna Craft, superintendent of the Letcher County Public School District.

“She was always a pioneer in everything and never afraid to tackle something,” said Craft. “You never heard her say no when it was going to benefit this community. In a small community, we all help each other.”

“She was a lady of vision,” said Craft. “She was a special friend and a friend of education.”

In 1991, Mrs. Baker was appointed to the University of Kentucky College of Medicine Admissions Committee, and through the position was able to help a number of qualified but often overlooked mountain students gain admission to the UK medical school.

In 1994 Mrs. Baker was appointed to the Letcher County School District’s Improvement Committee and the Hazard ARH’s advisory council.

Congressman Harold ‘Hal’ Rogers appointed her to the White House Conference on Aging in 1995 and to the board of directors for the Center for Rural Development in 1996.

Mrs. Baker was a member of the board of directors of Pikeville Methodist Hospital from 1999 to 2003.

Mrs. Baker was elected to the Whitesburg City Council in 1997.

In 2001, Mrs. Baker received a special recognition award from the East Kentucky Family Practice Residency Program in recognition of her outstanding commitment to the education of future doctors in rural Appalachia.

The National Rural Health Association named MCHC as an outstanding rural health practice at the 23rd annual national conference in New Orleans, La., in May 2000.

Mrs. Baker was preceded in death by a son, Robert Scott Baker, and a brother, Dr. James A. Adams.

Funeral services are set for today at 2 p.m. at Whitesburg First Baptist Church. Burial will follow at the Green Acres Cemetery. Letcher Funeral Home has charge of arrangements.

In lieu of flowers, donations are encouraged to be made to the Letcher County Schools Education Foundation.