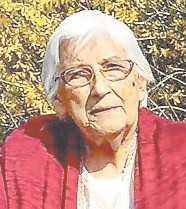 Born in Carbon Glow, she was the daughter of the late Jerry and Lula Back Smith.

After Carbon Glow Grade School, she was graduated from Stuart Robinson High School and credited SRS with providing her with the secretarial skills to remain employed much of her working life.

She married Ray T. Jett, a son of Ford and Callie Turner Jett, and had a son, Richard Marion, who, along with his wife Libby, survives on the family homeplace near Letcher. She then married Chester Elam, a son of Norman and Fanny Vance Elam, and had a daughter, Nancy Joyce, who also survives. She and her husband, Sam Walls, live near Hazard.

Several years after the death of Mr. Elam, she married Paul Lutes.

Mrs. Elam was a devoted member of the SRS Alumni Association, and the Back/ Bach members of the group are among her grieving survivors.