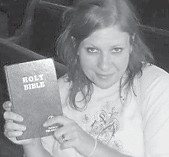 She was a daughter of the late George and Aileen Slone Couch.

Funeral services will be held at 11 a.m. today (Wednesday) at the Lighthouse Church. Burial will follow in the Couch Cemetery at Colson.