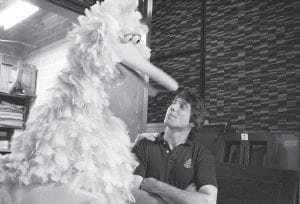 History.com reports that on November 10, 1969, “Sesame Street,” the pioneering TV show that would teach generations of young children the alphabet and how to count, made its broadcast debut on PBS (KET). The program went on to become the most widely viewed children’s program in the world, History.com says, and has aired in more than 120 countries. “Sesame Street” was created by Joan Ganz Cooney, who had hoped to use the program as a way to help underprivileged three- to five-year-olds prepare for kindergarten. In the photo above, Joe Namath, quarterback for the New York Jets, chatted with Big Bird during taping of an episode of “Sesame Street” in a New York studio in 1972. (AP Photo)