Sestina is a talker, and that’s a good thing, coach says 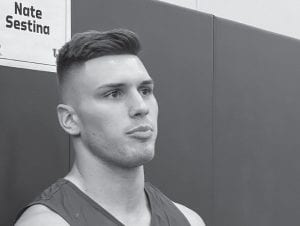 UK forward Nate Sestina is looking forward to playing for the Wildcats this season and gives the Wildcats a veteran player in the post. (Kentucky Today/Tammie Brown)

Nate Sestina likes to talk and John Calipari doesn’t mind have another voice on the court.

“It’s nice having a veteran that talks,” the Kentucky coach said. “I mean he over talks, he tries to get the guys to talk.”

Sestina is used to being a vocal leader and said playing four years at Bucknell “has really helped me out.”

For Sestina, he doesn’t mind being a team leader and guiding his new teammates — both newcomers and veterans along. Sestina spent the past four seasons at Bucknell, where he was the team’s second-leading scorer last season, averaging 15.8 points per game. He also led the team and the Patriot League with 8.5 rebounds per game.

“I’m coming in with a smaller spotlight, but with more of a pressure to lead,” he said. “The pressure for me doesn’t bother me. I’ve been a leader on a team for the last two to three years and I think I did a pretty good job of doing that at Bucknell. I’m trying to keep these guys on the right path and get to where we need to get to.”

Although a veteran, Sestina, who is coming off a foot injury, says he is in the best shape of his life and has trimmed down to 234 pounds. He is also eating better, which he also said his attributed to his current conditioning level.