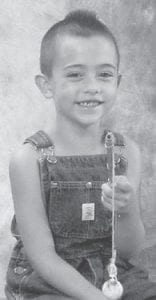 SEVEN YEARS OLD — Mercer Quillen celebrated his seventh birthday Dec. 8. He is the son of Brack and Kristin Quillen of Sergent, and has a sister, June, 1. He is the grandson of Raymond and Sharon Roberts of Thornton, Herman Quillen of Whitesburg, and the late Karen Quillen of Pensacola, Fla. Mercer raised $141 for St. Jude’s Children’s Research Hospital, and also donated money he received for his birthday. St. Jude’s says it will double the donation.