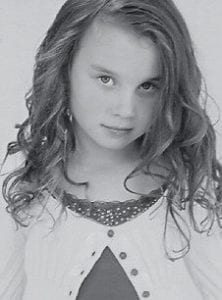 Makenna Lynn Adkins will turn seven years old on Sept. 2. She is the daughter of Roe and Kendra Adkins of Spartanburg, S.C., and is the granddaughter of Kenny and Cathy Rose of Whitesburg, Roe and Brenda Adkins of Hazard, and Martha Breeding of Premium. She has an older brother, Hayden, 11. She will represent Spartanburg for the National All-American Miss title in Hollywood, Calif., in November. She recently competed in the Miss South Carolina pageant, where she placed fourth runner-up, and was the Grand Supreme Winner of the Coconut Cuties pageant in Virginia. She was also crowned the 2007 Miss South Carolina Cover Girl and will have the opportunity to shoot photo ads for Limited Too and Toys-R-Us.