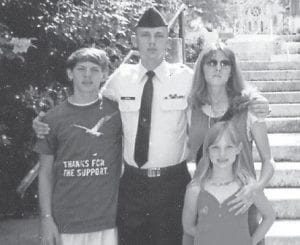 ELIJAH BRUCE CAUDILL of Cowan completed basic training at Lackland Air Force Base in San Antonio, Tex., July 10. He received the marksmanship award and honor graduate award. He was one of only two to receive this award out of the 200 men in his unit. Pictured with him are his brother, Luke, of Blackey, and his mother, Judy, and sister, Hannah, of Cowan. Also attending his graduation were his aunt, Darlene Hurt, and her husband, Earshel, of Blackey. The group’s trip took seven days and they toured Arkansas, Texas, Louisiana, Mississippi, Alabama, and Georgia. The family spent four days with Caudill in San Antonio, touring all the sites. He will now go to Shepherd’s Air Force Base in Wichita Falls, Tex., for 16 weeks’ training in loading bombs onto fighter planes. He is the son of Judy and Robert Caudill of Cowan, and grandson of Bruce and Shirley Gilley of Jeremiah.

We are having nice spring weather, and our trees are pretty and green.

A few people have planted a garden, but not near as many as we used to have.

I enjoyed a nice call from our niece, Christine Gatton, recently. Sorry her daughter, Melissa, has a bad back and has been in a lot of pain. I hope it will get better soon.

Get well wishes to our nephew, J. T. Caudill, who was in the hospital for a few days. Glad he is feeling better.

Our sympathy to our neighbor, Dorothy Caudill, in the death of her sister, Marie Shores of Sergent, who had been in poor health for some time. Dorothy visited her often and was a big help to her during her illness.

We are very sorry about the tragic death of our neighbor, Mr. Herbie Adams, who was fatally injured in a car accident.

He was a hard working man, and will be sadly missed by his family and friends.