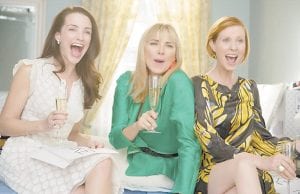 Early on in the new “Sex and the City” film – and don’t worry, we’re not spoiling the plot here – Carrie and longtime love Mr. Big are in bed together. A passionate interlude? Nah, they’re just reading. Except they both need glasses, and there’s only one pair.

Sharing reading glasses in bed? These two, who fogged up the small screen with their sexual chemistry during the TV series? Yes, and that small moment is a sweet acknowledgment that they’ve both aged.

The series may be alive and well on TBS reruns. But it’s been a full decade since “Sex and the City” premiered on HBO, bringing us sex columnist Carrie, her three gal pals, and their lustful urban quest for love, good sex and even better clothes.

That means these 30-somethings who spent six seasons drinking and trysting with abandon are now 40-somethings, with a couple characters even flirting with 50. And cynics are asking: Can they pull this off? How does “Sex and the City” get around the age issue?

In interviews with The Associated Press, the cast answered that question unanimously: It doesn’t. Age is not avoided here. It is embraced and even savored, like, well, a nice, cool Cosmopolitan.

“When we started cobbling together the movie, we knew there was only one road we could take,” said Sarah Jessica Parker, who stars as Carrie and co-produced the film. “You cannot pretend we’re 32, still running around New York drinking with liberty and looking for interesting sexual partnerships. It would have been vulgar. None of us wanted to do that.”

And so the film begins not where the series left off four years ago, but in the present. Carrie, now in her early 40s, is now a contributing editor to Vogue and a best-selling author.

She’s also got more money, and she’s got Big, who, you may recall, flew to Paris in the series finale to rescue her from a bad relationship. Now they’re in a happy place, and if you’ve seen the trailer, you know there are wedding plans afoot and a pretty amazing dress.

But you can tell things are going to be difficult, even sad. It’s a far cry from the story producers originally planned to tell four years ago.

“The movie we were going to make was totally different,” said Parker, 43. “It was a romp, kind of like those Bob Hope and Bing Crosby road movies. But four years have passed, and there’s just a lot more time invested in all these relationships.”

That includes the ties between the women, said Cynthia Nixon, aka Miranda, the high-strung, hardworking lawyer who is at a breaking point when the movie begins.

“We were all aware, partly because of the big screen but also because we’re older, that there has to be a maturity there with the way we confront problems,” Nixon said. “So when Miranda and Carrie fight, they take a little distance and try and work it out.”

Maturity can be seen in the clothes as well. “Were we still wearing these crazy outfits from 10 years ago, that would look wildly inappropriate,” Nixon mused. But relax, fashionistas: Fabulous clothes still have their place.

“We do have fantastic clothes and shoes, that hasn’t changed,” noted Kristin Davis, who plays Charlotte, the Park Avenue socialite who’s found domestic contentment with her good-natured husband, Harry, and their adopted Chinese daughter. “But we couldn’t pretend that time didn’t pass. Our point is to tell it like it is.”

The best example of that is Cattrall’s Samantha Jones, whose frank expressions of her lusty desires always made her character seem larger than life. But Samantha also suffered the worst hardship of all the women: breast cancer, in the show’s last season.

Cattrall is 51, and in the series Samantha rarely spoke of her own age. In the film, her age is mentioned and even celebrated, in a poignant way.

And Cattrall knows her performance is influenced by her own aging process. “A lot of things have happened in the last four years, and they haven’t all been great,” she said, referring to her divorce and her father’s diagnosis of dementia. “And it shades what you do. It shades who you are.”

With nobody left to represent the younger set, Michael Patrick King, who directed and wrote the film (and co-produced it with Parker), brought in Jennifer Hudson, the 26-year-old Oscar winner from “Dreamgirls,” to play Carrie’s tech-savvy assistant.

Aging is not just a female process, of course, and Mr. Big, played by Chris Noth, has a little added gravitas now, perhaps a few gray hairs, and a more mature approach to romance (To a point. This is Big, after all.) Noth, 53, seems thrilled that the film is presenting a set of mature characters.

“Where did the notion come from that the lives of adults are less interesting than the lives of those under 30?” he asked. “I actually think the movie has MORE relevance. I think the girls look better. And I’m just happy that we have some adult entertainment here.

“We’ve strayed so far in our culture, it’s like, you know, can kiddie time be over?”