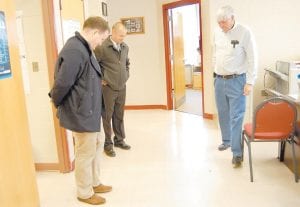 ALL EYES ON THE PRIZE — The eyes of Whitesburg City Council candidates Thomas Sexton (left) and Matt Butler (center) and Letcher County Clerk Winston Meade were focused on a coin tossed last Thursday to break a tie vote for the sixth council seat. Sexton won the toss by calling “tails.” (Photo by Sally Barto)

Sexton, 27, had been tied with Whitesburg attorney Matthew Thomas Butler in the very first political race for either candidate. Each received 282 votes on November 6. Sexton won the toss after calling tails while the coin was in the air.