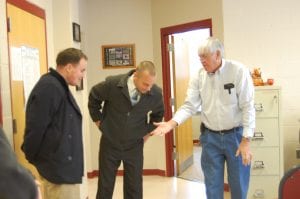 Tom Sexton on Thursday became the sixth person elected to the Whitesburg City Council. Sexton got the position after winning a coin toss in the offices of Letcher Court Clerk Winston Meade.

Sexton had been tied with Whitesburg attorney Matthew Thomas Butler. Each received 282 votes on Tuesday. Sexton won the toss after calling tails while the coin was in the air.