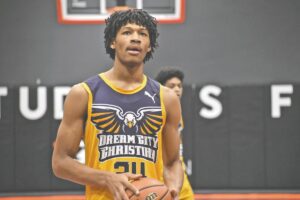 Valerie Wade needed assurances from coach Mark Stoops that he would be at UK to coach her twins Destin, left, and Keaten Wade and got it. (Twitter Photo)

Shaedon Sharpe, the top-rated recruit in the 2022 class, should arrive on the University of Kentucky campus soon now that he has reclassified and plans to join the Wildcats for the second semester.

His initial plan is to practice with the Wildcats this season and then play for coach John Calipari’s team during the 2022-23 season. However, speculation continues to grow that Sharpe could be a valuable addition to the team this year and may play once Southeastern Conference play begins.

The 6-5 Sharpe is an elite scorer and wing player. He has said he would do whatever Calipari needed this year and the UK coach has also never totally ruled out the possibility of him playing this season.

Alabama signee Brandon Miller of Nashville played against both Sharpe and Cason Wallace, another UK signee, at Peach Jam last summer. The 6-8 Miller talked to Sharpe while Miller was at Marshall County Hoopfest recently.

“Shaedon is really athletic. He can jump out of the gym and score at every level.

He’s hard to guard for anybody,” Miller said. “I believe he can help anywhere he wants to play. He’s just that type of player. If he decides to play this year, he’ll help Kentucky.

“He facilitates better than he does anything else and his vertical is probably 48 (inches) or so. It is way up there and you can’t believe it until you see it.”

Kansas signee M.J. Rice of Prolific Prep (Calif.) was also at Marshall County Hoopfest — where Sharpe was scheduled to play with Dream City Christian (Ariz.) before reclassifying — and also had high praise for Sharpe.

“He is a great player. He is very smooth with the ball and can really score,” Rice said. “He is very athletic and a really good dude from what I know about him. He will be really good at Kentucky.”

Rice prides himself on his physical play, so I asked him if he thought Sharpe would be physically ready to play against SEC competition in January.

“I would not say he is as physical as me because I am way bigger but for his size, he knows how to move and maneuver. He is a great player but not a physical player,” Rice said.

“From what I have seen, he is definitely capable of playing college basketball this year, though. He can be as good as he wants to be. I am rooting for him. I want him to eat (succeed) and I think he will.”

Kentucky coach John Calipari came to Hoopfest to watch 6-11 Yohan Traore of Dream City, who transferred from Prolific Prep this season thinking he would be playing with Sharpe at Dream City. Traore’s advisor, Daniel Ehambe, would not be surprised if Sharpe plays for UK this season.

“He’s just a special, elite athlete. Really, he’s one of a kind. I think he definitely could help Kentucky. No question at all about that to me. He’s that good,” Ehambe said. s

Tshiebwe is a rebounding machine. He led the country in offensive rebounding percentage as a freshman at West Virginia in 2019-20 before transferring to Kentucky. He had seven double-doubles in UK’s first eight games this year and is averaging 14.4 rebounds per game, the top mark in the nation, along with 16.3 points per game — both team highs. He also leads the team in steals with 13 and blocked shots with 17.

Kentucky coach John Calipari has had some elite players at Kentucky but only two players — Anthony Davis and Julius Randle — averaged more than 10 rebounds per game. Tshiebwe had 56 rebounds in Kentucky’s first three games, more than any other UK player has ever had.

Two-time All-American Bob Burrow set the UK rebounding record during the 1954-55 season when he pulled 459 rebounds in 26 games — an average of 17.7 rebounds per game. He got 34 against Temple to tie Bill Spivey for UK’s single game rebounding record.

“The energy I have is a gift from God,” Tshiebwe said. “I don’t care about scoring. I want to bring something special. I want my name one day to be remembered like Anthony Davis.”

He cited his season-opening 20-rebound performance against Duke and likely future NBA player Mark Williams as proof of what he could do. It seems inevitable that Tshiebwe will break the Rupp Arena record for rebounds in one game. He’s already tied the UK mark (20) and is one shy of the record set by LSU’s Shaquille O’Neal in 1990. s

Senior linebacker DeAndre Square understood why linebackers coach Jon Sumrall could not pass on the opportunity to be head coach at Troy University.

“He’s Big Blue all the way down. He would love to stay here for as long as he can, but the opportunity that he had was just something he couldn’t pass up on,” Square said. “When he called me – because he called me before the news got out – we had a nice conversation and I couldn’t do anything but smile for the guy, because, I mean, he’s helped everybody that he’s come across in that facility here at UK. He helped all the linebackers.”

Square developed into one of the SEC’s leading tacklers the last two years and admits Sumrall has been “important” in his development.

“He’s always been there for me. I was nothing but happy (about his new job) because that’s a big-time job,” Square said. “He’s a very exciting guy. He’s like the tone setter. He’s always got energy and juice no matter what day it is, game day, practice, film day. He’s always got juice.

Sumrall could have said goodbye to his players and concentrated only on his new job. Instead, he wanted to coach in the Citrus Bowl to help UK win a 10th game.

“We’re just going to enjoy the last time he’d be our coach. So every chance we get, every meeting, every practice, I know that me and the other linebackers are going to go hard for him, because we know how much this last game is going to mean to him,” Square said.

“He wouldn’t want to leave this university. But he got a great opportunity, that’s the only reason. We’re going to play very hard for him because we know how much it means to him.” s

If you have missed having the Firecrackers — a performance jump rope team made up of third through eighth graders from the Kings Schools in southwest Ohio — in Rupp Arena because of COVID, mark January 15 on your calendar.

That’s when Kentucky hosts Tennessee in a SEC showdown and when the Firecrackers will be back at Rupp Arena.

The Firecrackers have 21 team members this year and have now been performing for almost 30 years. They have already performed at the University of Michigan and Miami University this year and will also perform at Xavier, Louisville, Indiana, Purdue, Belmont and Cincinnati this season along with various high schools. The Firecrackers will also perform for the Indiana Pacers, Cleveland Cavaliers and Chicago Bulls.

It’s always the favorite halftime show of the season at Rupp Arena and one if you have ever seen you definitely will remember. s

Kentucky coach Mark Stoops isn’t sure if any of his players might decide not to play in the Citrus Bowl Jan. 1. Former players Josh Allen, Benny Snell, Lynn Bowden, Landon Young and others played in bowl games even though they expected to be picked in the NFL draft.

Stoops said he would “never put pressure on a young man to guilt him into coming back” to play in a bowl game if that is not what he wanted to do.

“That has got to be a personal decision and I’ll respect it either way. We have been fortunate that the precedent has been set a long time ago,” Stoops said.

He recalled how many national awards Allen was collecting before UK played in the Citrus Bowl after the 2018 season.

“He was busy and tired, so I told him ‘Josh you do not have to come back. Your legacy is set forever. You do not need to play this game,’” Stoops said he told Allen.

Allen told the coach he wanted to finish what he started at UK, so he played in the bowl game. Obviously, defensive lineman Josh Paschal has decided he’ll play in the Citrus Bowl before seeing what happens with the NFL.

“We still have a lot to prove. We’re 9-3 and we want to hit that 10-win (mark),” Paschal said. “We’re focused on our next game and this next game just happens to be the last.