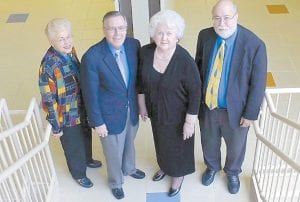 While making arrangements to set up a gift for Southeast Kentucky Community and Technical College with a value of over $50,000 to fund the Pauline (Penny) Ritter Combs Southeast Scholars Endowment, Mrs. Combs began to reminisce to me about how the college’s Whitesburg Campus began more than 18 years ago.

The idea for the campus originated in the late 1980’s during a Sunday lunch conversation between Mrs. Combs, her late husband, Goebel Ritter, her late parents, Atha B. and Judge James M. Caudill Sr., and Whitesburg residents R.C. and Francis Day.

“We were talking about what else our county needed,” Mrs. Combs said. “We’d opened a nursing home. The city had just purchased the Coca-Cola bottling plant. The mayor, Jimmy Asher, had asked for suggestions for its use. The highways had bypassed us and all the communities around had a college except us. So, we thought we needed a college.”

Mrs. Combs said Mayor Asher did not immediately agree with the idea. He had already gotten several other suggestions for how the old Coke plant should be used. Some had suggested using it for a coal museum, some had suggested an art museum, and others wanted the fire department to move there. But Mrs. Combs did not give up.

“I (could) see the students on the campus feeding the ducks on the bank of the river,” she said.

Mrs. Combs remembers making telephone calls to the mayor’s office nearly every day for two weeks to plead her case. She said she grew so frustrated at one point that she stopped her car by the side of the road near the Coke building and began to cry.

“I could see it – the college there,” she said. “And, then, Jimmy called me not long after that and said he agreed that we might pursue getting a college to locate in Whitesburg after all. He said he’d use his expertise as an attorney to help us set up a structure to make it possible.”

Mr. Asher quickly set up a meeting, held at the Courthouse Cafe in Whitesburg, between Mrs. Combs and her father and Southeast Community College officials Charles “Red” Sellars, dean of student affairs, and Dr. W. Bruce Ayers, president of the college, to outline the idea. Since Southeast was already offering a few classes in Whitesburg and other sites in Letcher County in borrowed space, a permanent location in Whitesburg was appealing to Dr. Ayers and to Sellars.

Mrs. Combs said Dr. Ayers explained that time was short, and that he’d have to make a formal proposal to the Chancellor of the Community College System, then a part of the University of Kentucky, at the end of that week. And, he told the group it would take a lot of money, explaining that the College did not have the funds to renovate the Coca-Cola building.

“I think the city had paid $161,000 for the building,” Mrs. Combs said. “We (by then the group of interested citizens had formed the Whitesburg Education Development Foundation Inc. – April 4, 1989) wanted to buy the mortgage on the building from the city. Then, we could mortgage the building, advertise for bids, borrow against the building and remodel it. About 10 of us signed the note to borrow the funds for the remodeling.”

She remembers that, “we hit the road running – getting pledges and donations – whatever we could secure from businesses and the public in general. And, it grew from that. We had a radio show and people called in to pledge as little as a dollar and as much as a thousand dollars. Every major coal company operating in Letcher County, some doctors, and different businesses gave us donations. The E.O. Robinson Trust made a matching donation of $142,200 as well as the Letcher County Fiscal Court, Community Trust Bank, and the Bank of Whitesburg. We even sold stickers that said ‘I’m backing Southeast Community College’ at the Mountain Heritage Festival.”

Mrs. Combs said another community leader, Josephine Richardson, invited Mary Bingham – whose family owned the Courier-Journal in Louisville for many years – to donate to the project. She said Mrs. Bingham “sent us $50,000” and was later invited to come and see the college.

“I never left Mary’s side – talking to her – wanting more money,” Mrs. Combs said, remembering that Mrs. Bingham spent the weekend at the Mayking home of late author Harry Caudill and his wife, Ann. “I said we needed it. She said that she’d given money to many things that had disappointed her, but that she was impressed with the college in Whitesburg. In fact, she was so impressed that she gave another $100,000 – for a total of $150,000 – to the project. In all, we (the Whitesburg Education Development Foundation Inc.) raised over one million dollars.”

“People said we couldn’t raise the money in time, but we did and a college was born here in 1990,” said Mrs. Combs. “The night before the college opened, work was still going on. I prayed that night and asked the Lord to let one person show up. The next day I was called along with the other members of the foundation and told to come over to campus. We went and it was a madhouse. There were cars everywhere. No one could get out of the neighborhood to go to work.”

In all, almost 400 students showed up that first year. The average age of those in attendance was 29, and 75 percent were female. This year, SKCTC’s Whitesburg Campus has a total enrollment nearing 500.

“My greatest joy is to see the students walking to our campus,” Mrs. Combs said. “It (the college) is my legacy – educating our people is the love of my heart.”

Mrs. Combs’s parents were heavily involved as well in making the college a success. As part of Southeast’s Partners in Progress Campaign, they set up the James and Atha Caudill Endowment to provide scholarships to students in Letcher County with financial need to attend Southeast.

The work of the Whitesburg Education Development Foundation Inc. also continues. In the college’s current Fulfilling the Promise Campaign, the Development Foundation gave a lead gift of $232,410 in 2006, made possible by income derived from a gift of land to the foundation from Maynard and Evelyn Hogg. Many others, too numerous to name here, have enabled the Foundation to continue to support higher education in Letcher County.

And, now, Mrs. Combs’s recent (December of 2007) very generous gift to the Fulfilling the Promise Campaign valued at over $50,000 will be used to help fund the college’s Southeast Scholars Program, a program that targets sixth graders who show academic promise, but who do not have the means to attend college.

Penny Ritter Combs has, indeed, left a legacy of her love of education to the community of Whitesburg and Letcher County that will live forever. She envisioned the Whitesburg Campus, worked for it, gave to it, and it came to pass.

Judith Leonard works as director of advancement for Southeast Kentucky Community and Technical College. Her office is in Cumberland.