It has been more than three years since Cassidy Rowe verbally committed to play basketball at the University of Kentucky but despite all that has happened in that time in other ways it doesn’t feel like it has been that long to her.

“In some ways it feels like it was just yesterday when I committed,” said the Shelby Valley High School guard who signed with the Wildcats last week.

She had a torn anterior cruciate ligament and was rehabbing a knee injury when she committed to UK and despite another ACL knee injury, a rib injury and the departure of head coach Matthew Mitchell, Rowe never wavered in her desire to play for UK.

“So much has happened since I committed,” she said. “When I committed (as a freshman) I knew it was a huge deal but it never really crossed my mind I was actually going to Kentucky. Now signing makes it a reality that in a few months I am going to Kentucky and actually going to be on the team. That is amazing to me and such a blessing. It’s something every little girl dreams of.” 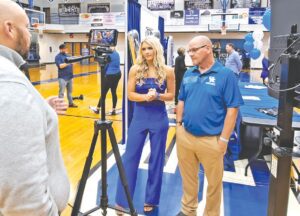 Shelby Valley guard Cassidy Rowe (middle) never took an official visit to any other school after committing to UK her freshman year. (Photo by Larry Vaught)

Cassidy Rowe said the family and fan support she got in eastern Kentucky was “truly a blessing.” Her father, Shelby Valley coach Lonnie Rowe, and others made sure the signing ceremony was special.

“I felt very loved. It was just special,” she said.

Despite all that happened in the three years after her commitment to UK, she never had any second thoughts about whether Kentucky was the right spot for her.

“Coach Mitchell stepped down and then coach (Kyra) Elzy became the coach. I was sad he stepped down because he really did change my life with the scholarship offer. But I love coach Elzy and I am glad she was the one who became the head coach,” Rowe said. “I just knew I wanted to be at Kentucky. The second I went there for my first visit when I was in middle school, it was for me. Everybody treated me as if I was already a Wildcat even then. I knew I wanted to stay close to home and knew then it was UK for me.”

Rowe recently took her official visit to Kentucky and said she was “treated like royalty.” She never considered taking any other official visits, unlike some athletes who visit several schools before they commit or even take visits after they verbally commit. Rowe visited Louisville — the team she grew up cheering for because her dad is a Louisville fan — in middle school and also went to an elite camp at Northern Kentucky. That was it for being on other campuses.

“Kentucky was always loyal to me through all my injuries, so I just wanted to stay loyal to them, too,” Rowe said. “It was a big thing when Kentucky offered right after I had my first (ACL) surgery. A team that had so much faith in me and was so encouraging to me, that meant a lot.”

Rowe has not had a chance to talk with Mitchell since he resigned before the start of last season for personal reasons. She would like to speak to him to say thanks.

“I have let him know in the past when we talked that he was a big difference maker in my life but it has been a while since I told him that. It would be nice to see him and tell him again,” the Shelby Valley senior said.

Going into this season, Rowe has scored 1,032 points and 182 made 3-pointers. She has dished out 464 assists, pulled off 321 rebounds and made 198 steals. She played in 65 high school games as a middle schooler but was limited to six games her freshman season and 19 as a sophomore due to the ACL injuries. Last season she averaged 12.9 points per game and shot 41 percent from 3-point range.

Her father believes she would have close to 2,000 points and 1,000 assists if she had not been injured because even the games she played as a freshman and sophomore she not only wore two knee braces but had a restriction on minutes she could play.

“She only played a handful of games those two years when she even played three quarters. Most times it was two quarters,” Lonnie Rowe said.

Cassidy Rowe says she is now healthy and a better player than she was before her injuries.

“I just want to stay healthy this year. It took a lot to get back here and I feel I am back to where I was before the knee and rib injuries,” Cassidy Rowe said. “I think I am quicker and stronger and excited to show what I can do.” s

Count ESPN national director of recruiting Paul Biancardi as a believer in John Calipari’s 2022 recruiting class with the recent addition of Texas guard Cason Wallace, the third top-10 player in the 2022 class.

“Look for Kentucky to have a potent perimeter attack next season with Cason Wallace, Skyy Clark, Shaedon Sharpe, and Chris Livingston,” Biancardi said.

The ESPN analyst thinks Wallace was the perfect fit for Calipari and the other commitments.

“Wallace is a true combination guard and a two-way contributor because he can be effective with the ball, be a threat off the ball and defend with impact,” Biancardi said.

“With the addition of Wallace, Kentucky will have four prospects inside the top 20. That should slide the Wildcats up to the No.1 recruiting class.”

Wallace writes a blog for Sports Illustrated (www.si.com) and believes the future Cats will be able to live up to their lofty rankings.

“I think we all have winning mentalities and I feel like we have a strong chance to win a national title. I know that’s already our goal now because we know what we signed up for coming to Kentucky,” Wallace wrote.

“I just look at all of the talent that we’ll have, and I love that we’ll be able to push each other in practice every day, because that’s the way you really get better.”

Travis Branham, national basketball analyst for 247Sports, credits UK assistant coach Jai Lucas for building an early relationship with Wallace when he was still an assistant coach at Texas.

“Cason is just a winner. He doesn’t play a sexy game. He will not wow you by creating shots for himself like Shaedon and Skyy,” Branham said. “He is also an elite defender. He’s very good in transition. He can make shots. He just impacts the win column in a lot of ways.”

While Branham considers him a pass-first point guard and capable scorer, Wallace’s defense is what separates him from other players.

“He will be the best on ball defender. He is just a big-time defender and very good positional rebounder,” Branham said. “ On the other end, he can function on and off the ball. That will allow Shaedon and Skyy to go get baskets.” s

Franklin County junior running back Kaden Moorman has rushed for 1,246 yards and 23 touchdowns in 12 games to help the Flyers reach the Class 4A quarterfinals. He is also a University of Kentucky commit in the 2023 recruiting class.

Moorman had a big game — 103 yards rushing and one touchdown on 16 carries and four receptions for 61 yards in a 27-7 September loss at Corbin but certainly impressed Corbin coach Tom Greer.

“He is a great back. No question,” Greer said. “To me, I believe he is the best back in the state of Kentucky in the 2023 (recruiting) class. He’s big and runs really well.”

Greer knew Wisconsin had offered Moorman a scholarship and figured that made him “legit” because of past running backs who have played there.

“I think he was a huge commitment for UK,” Greer said. “I think it speaks volumes about Kentucky and why he sees Kentucky as a top team in the country.

“But Moorman is everything you want and more. Watching him on film and then playing against him, every time he touches the ball he is a threat. He is a big, thick back. I think he could carry it 25 times per game easily.

“He’s just a big-time commitment for UK. I really believe he will give Kentucky that back for the next three or four years that can make big things happen.”

Franklin County will host Allen County-Scottsville in the Class 4A semifinals.

Quote of the Week: “I don’t even know why I turn in plays anymore. It certainly doesn’t matter. I don’t think I will from now on,” Mark Stoops on why he will not send questionable officiating calls to the SEC office anymore to review.