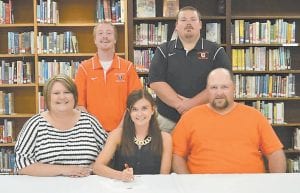 Reanna Nicole Elswick, a senior at Jenkins High School, signed to pole vault at Union College in Barboursville. She is the daughter of Sammy and Shellie Elswick of Jenkins, and is the school record holder at Jenkins for pole vault. She placed sixth in the state in 2014 and fourth in the state in 2015 at the Kentucky State Track Meet. She will continue her track career, competing for Union in its indoor and outdoor meets.