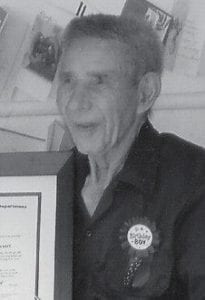 Sherd Martin died September 6 at the Pikeville Medical Center. He was 100 years old.

He and his wife, the late Alma Hickman Martin, were married for 78 years. The couple were often featured in The Mountain Eagle in columns written by their good friend, the late Mabel Kiser, who wrote the Millstone news. Mrs. Martin died May 9. Sherd Martin had been member of the Thornton Old Regular Baptist Church at Mayking since 1931, and was coal miner at South East Coal Company for 36 years. He was also a member of the United Mine Workers of America.

Funeral services were held September 9 at the Thornton Old Regular Baptist Church at Mayking. Burial was in the Thornton Cemetery.