Sheriff candidate jailed after failing to appear at trial 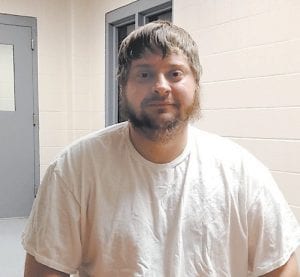 “Walking Tall” Jon Hall was interviewed Tuesday in the Letcher County Jail, where he is being held on contempt of court charges.

A Democratic candidate for Letcher County Sheriff has been jailed on a contempt of court charge with less than a week remaining until the May Primary Election.

“Walking Tall” Jon Hall, 36, of Neon, was arrested April 28 and charged with contempt of court after he missed his jury trial, which was set for 10 a.m. that day. Hall said he thought the trial started at 11 a.m., but still late by half an hour after arriving to Letcher District Court at 11:30 a.m. By that time, Letcher District Judge Kevin R. Mullins, 17 prospective jurors and four subpoenaed witnesses — including one from Lexington and one from Frankfort — were no longer in the courtroom.

“I did show up a little late where I was taking my little ones to LKLP Headstart,” said Hall. “As soon as I opened that courtroom door and I saw that there wasn’t anyone in there I knew that I had missed my court date.”

Hall said he walked into the re- ception area of the district judge’s office and the bailiff escorted him across the street to the sheriff ’s department where he was arrested. Mullins sentenced Hall to 60 days in the county jail.

Hall had planned to represent himself in court while standing trial on two counts of third-degree terroristic threatening.

“And I would have won,” said Hall.

Hall called the misdemeanor charges “trumped up.” He is accused of threatening to “whip (Neon Fire and Rescue Chief ) Carter Bevins’s ass.” On a separate occasion he allegedly threatened to “whip his (Bevins’) punky ass,” according to a criminal complaint.

“Carter Bevins said that I threatened to beat him up when I did not,” said Hall.

Hall said he was accused of threatening Bevins after Hall spoke to the Fleming-Neon City Council at its January meeting. He said he wanted to be a member of Neon Fire and Rescue, but Bevins wouldn’t allow it.

Hall said he drove a Neon fire truck in a parade last September, but after he filed to run for sheriff he was no longer welcome at the fire department.

“He tried to say that it is because I am a felon,” said Hall, who has been convicted of theft by unlawful taking of a tow truck.

Hall claims that at least one member of Neon Fire and Rescue is a convicted felon.

“It’s a double standard,” he said.

Since November, Hall said, he has contacted officials in the offices of the governor, Kentucky Attorney General and the state fire commissioner about his dispute with Bevins.

Hall claims he has undergone more training to be a firefighter than many of the current members of the Neon department.

“My firefighting training came from Northern Kentucky University, University of Cincinnati, Cincinnati Air Care, electrical training and confined space and rescue training from OSHA. I’m one of only maybe a dozen people who have that training in this area. I can go in a coalmine and rescue miners. (Bevins) says no and won’t let me.”

Hall said he has wanted to be a fireman since he was a young boy.

“And my papaw Lawson Dishman encouraged me to always go after my dreams, don’t let up, don’t ever give up, don’t ever let anyone hold you down and to fight for what you believe in,” said Hall.

After spending the last two weeks behind bars, Hall hasn’t been able to do much campaigning.

“I have a politician who paid $10,000 for four-foot by eight-foot signs that are being made in Erlanger and I have been in here so I couldn’t go get them,” Hall said Tuesday afternoon during an interview with The Mountain Eagle at the Letcher County Jail.

Hall said 10 campaign signs have been digitally etched on acrylic sheets that are supposed to be mounted to plywood.

Even with the lack of campaign time, Hall is confident that he is going to win Tuesday’s election.

“I have had certain people in public office tell me point blank that this is going to be a close race,” said Hall.

Hall said that if elected sheriff he would crack down on illegal gambling, prostitution and drug dealing as well as bring more jobs to Letcher County.

“I’m actually going to kick the drug dealers’ doors down,” said Hall. “I’m a leader not a follower. I wouldn’t ask my deputies to do anything that I wouldn’t do myself.”

Hall said his house at Neon burned to the ground in the middle of the night on April 2, the day after his 12th wedding anniversary.

“Me, my wife, my kids and my parents almost died in that home,” said Hall. “We literally barely made it out.”

Hall said he and his family had been staying at the Whitesburg Motel until his wife Malinda found another house in Letcher County recently. The Halls have four children, Jonathan Jr., Elizabeth Hazel, Harlan and Hope.

A new jury trial date regarding the terroristic threatening charges has not been set.

Hall concluded his interview by saying, “I look forward to serving you as sheriff.”

Incumbent Danny Webb, Randall Adams and Ellis Keyes are also running for sheriff as Democrats. Two Republicans are running for their party’s nomination for sheriff . They are Roland Craft and D.L. Hammonds.