Sheriff, others move offices across street 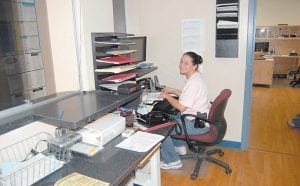 Two agencies have outgrown their offices in the Letcher County Courthouse but still found a way to gain more space.

"(Sheriff Danny Webb) was really cramped up in that little space he had and needed to spread out," said Letcher County Judge/Executive Jim Ward.

"It allows more privacy for our victim’s advocate, officers and sheriff to meet with people," said Crystal deputy.

Webb said his department now has several offices in addition to a lobby, kitchen area, evidence room and a large storage room for case files.

"Always before I had to store files in the storage unit," said Webb. "Every year we would get more files."

"We are happy to be able to move in there and hope it won’t be too much of an inconvenience to the public during the move," said Webb. "I invite the public to come in and I will show them around."

The sheriff ‘s department will share the first floor of the building on Broadway Street with the Letcher County Water and Sewer District. The county sanitation billing department may also move to the new location. Letcher County Coroner Wallace Bolling Jr. will also have an office in the old health building.

"The coroner didn’t have an office at all and needed to spread out," said Ward.

Letcher County Emergency Management Director Paul Miles said in the event of a major disaster the conference room would be used as an emergency operations center.

The Letcher County Court Clerk’s office will expand into the courthouse space previously occupied by the sheriff ‘s department.

"We will have more room for our delinquent tax bills," said Meade. "Most of the stuff that comes through the clerk’s office has to be retained for life."

Meade said a new doorway will connect the two offices.

"I think it will benefit the public once we get it set up," said Meade. "The only thing we have to do is get a door and get our computer system set up."