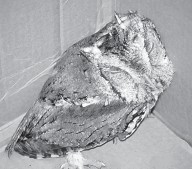 SLEEPY OWL — This screech owl, seen here sleeping in a box in the Letcher County Sheriff’s Department, was found at Cram Creek Nov. 30 by a woman who was driving her children to school. She called LaShawna Frazier, a certified equine investigator with the sheriff’s department, who rescued the owl, which had injured its wing.

The newest case involves two horses found on a road at Indian Creek on Nov. 20.

“We asked people on Indian Creek and no one claimed them,” said LaShawna Frazier, one of the sheriff ’s department’s certified equine investigators. “They could have come from Thornton, Millstone or Camp Branch. All of that runs together.”

Frazier said the horses are being taken care of and the owner of the horses is asked to contact the sheriff’s department to claim the animals.

“If no one claims them within 10 days they will be considered abandoned and will be awarded to people that are interested in them and will take care of them,” said Frazier.

Frazier said the horses are healthy because they have been grazing. She anticipates that the number of horse complaints will increase during the winter months when horses aren’t able to graze and must be fed.

In the last eight months Frazier and Crystal Davis, who is also a certified equine investigator, have found homes for horses that were either abandoned or the owners felt like they could no longer care for them.

“If the owner finds that they cannot take care of the animal, call the sheriff’s department and we will find a home for the animal so it won’t starve,” said Frazier.