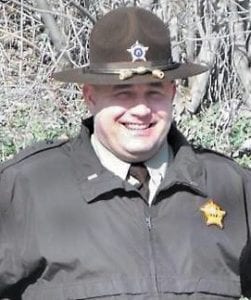 A Letcher County sheriff ’s deputy has been fired as the result of an investigation into evidence found missing from the property room located inside the sheriff ’s office.

According to Sheriff Danny Webb, Brian Damron, 38, was formally relieved of his duties as the department’s operations lieutenant January 15 after an internal investigation found that Damron removed six department-owned firearms from the property room and sold them to private citizens.

Damron has not been charged with any crimes, but the results of the investigation — ordered by Webb several weeks ago and completed on January 16 — will be turned over to the Letcher County Grand Jury. It will be up to the grand jury to determine whether criminal charges will be filed.

“I’m going to the Letcher County people to let them know what happened,”

Webb said in his office this week after confirming reports that Damron had been fired. “The people have faith in me that I’ll do the right thing.”

Rumors about Damron’s involvement with missing evidence and his job status began circulating in mid-December. Speculation then snowballed after other sheriff ’s deputies were seen driving the patrol car previously assigned to Damron, who joined the sheriff ’s department in August 2007 and quickly worked his way up through the ranks.

When asked about the rumors shortly after Christmas, Webb responded by saying he had ordered an inventory of all evidence being stored in the sheriff ’s department. He also said at the time that Damron was off duty and drawing worker’s compensation for a leg injury he suffered while chasing a suspect over an embankment.

Webb said this week that he ordered Deputy Barry Engle, a former Kentucky State Police trooper, and Chief Deputy Markus K. Terry to conduct the investigation after it was determined that evidence from a January 2013 criminal case had been mishandled. The probe by Engle and Terry resulted in the discovery that six weapons purchased by the sheriff ’s department — two AR-15 rifles manufactured by the Doublestar Corp. or Winchester, Ky., and four Glock 26 “Baby Glock” handguns — were missing and had been sold by Damron to members of the public who had thought the guns were privately owned.

Damron, a certified firearms instructor whom Webb had placed in charge of the department’s weaponry, was fired because of his failure to “follow department protocol for the handling and packaging of evidence.”

Webb had a look of disappointment on his face this week when he was talking about the internal investigation and his dismissal of Damron, who had been in charge of many high-profi le criminal investigations conducted by the sheriff ’s department.

“ You’ve got every opportunity to do it right,” Webb said.

Letcher Commonwealth’s Attorney Edison G. Banks II wasn’t sure on Tuesday when the grand jury might take up the findings in the report prepared by Engle, who is in charge of the investigation, and Terry.

The Mountain Eagle has learned that officials started becoming suspicious of Damron’s activities while a January 18, 2013 drugtrafficking case involving a 38- year- old Kona man wound its way through Letcher Circuit Court and Damron requested delays on the final hearing in the case, which involved the forfeiture of property.

The defendant, Bobby Briggs, pleaded guilty to possessing controlled substances after Damron and six other state and local police officers raided his home at Bill Lewis Hollow and found 475 tablets of oxycodone and other narcotics and anti-anxiety drugs, along with cash totaling $13,510.

Webb said this week that evidence related to all active drug cases involving the sheriff ’s has been inventoried.

“As far as we can find there are no drugs missing,” he said. Webb also said that all money has been accounted for.

The case involving Damron isn’t the first in which guns have turned up missing from evidence lockers in Kentucky.

In May 2012, two Fayette County sheriff ’s deputies and one former deputy were charged with theft, official misconduct, and other charges after they took six guns from an evidence locker in Lexington and sold at least two of them at pawn shops.