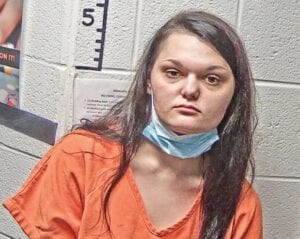 McKenzie McIntyre is being held in the county jail.

The Letcher County Sheriff ’s Department and Jenkins City Police have charged a Jenkins woman with trafficking in methamphetamine and other charges after serving a search warrant on her home at Improvement Branch.

Sheriff Mickey Stines said officers seized more than four grams of methamphetamine and over $5,000 in cash in the New Year’s Eve raid.

“We feel like she tossed some dope out the window of the vehicle. They came upon us as we were searching the residence,” Stines said.

According to the citation,

McIntyre was the passenger in a pickup driven by David Wells that pulled into the driveway, then backed out and continued to the head of the hollow. The citation says that Mc- Intyre threw out a key ring with several containers attached that held pills that appeared to be Xanax, Viagra, and Lyrica, and another container that held what appeared to be methamphetamine.

The citation, written by Deputy James Norris, says that McIntyre was also a passenger in another vehicle he stopped in September, who jumped out of the vehicle and ran during the course of a pursuit.