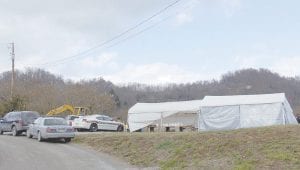 ROADSIDE DRUGS? — Letcher County sheriff’s deputies and Kentucky State Police converged on a fruit and vegetable stand in West Whitesburg on Tuesday. Sheriff Danny Webb said drugs being sold at the stand were being supplied by a used car salesman working nearby. (Eagle photo)

Police say customers were able to buy more than apples and beans at a Whitesburg fruit and vegetable stand.

George Thomas, 66, of 291 Circle Drive in Whitesburg, was arrested at his produce stand located behind Rite Aid Pharmacy around 11:30 a.m. on December 2 after the Letcher County Sheriff’s Department investigated allegations that Thomas was selling prescription narcotics illegally.

“We started getting complaints on him two or three months ago that he was selling drugs from his roadside stand,” said Letcher County Sheriff Danny Webb. 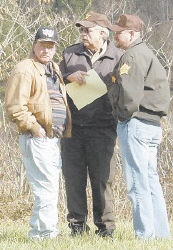 Police also found skelaxton, a type of muscle relaxant, in Thomas’s possession, along with empty pill bottles with prescriptions for hydrocodone and an undisclosed amount of cash near the produce stand.

Sheriff’s Dept. Sgt. Brian Damron said Thomas told police who had been supplying him with the controlled substances he was selling.

“He gave a statement to us and with that information, warrants were served,” said Damron. 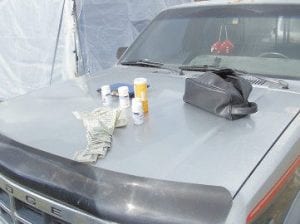 Prescription pill bottles and cash were placed on the hood of a pickup truck belonging to Thomas during Tuesday’s bust.

Damron has charge of the investigation into Combs’s case, while Sheriff Webb is in charge of the Thomas investigation. Webb said information gathered in both cases will be presented to the Letcher County Grand Jury. Webb asks that anyone with information about drugs being used or sold illegally in their community call the sheriff’s department at 633-2293.