By MARY FOSTER The Associated Press 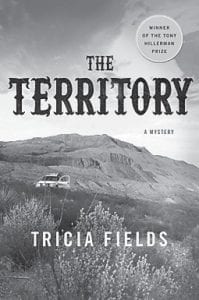 ‘The Territory’ by Minotaur books.

Readers get a taste of the fear experienced when Mexican drug cartels threaten a small Texas border town and its sheriff in Tricia Fields’ new mystery, “The Territory.”

Artemis has a population of 2,500. Located on the banks of the Rio Grande, it was built for free spirits who want to escape the turmoil of big cities.

Police chief Josie Gray finds both terror and treachery as she is drawn into a war between two rival drug cartels that are fighting to control the town.

Gray shoots two members of one of the cartels when they storm the town clinic looking to kill the boss of the rival drug gang. One dies and the second is locked in the Artemis jail, presenting a constant danger of retaliation.

The situation is complicated by the murder of local right-winger Red Goff, who didn’t trust the government or any of its agencies. Goff ’s body is found on his neighbor’s couch with a bullet hole in his forehead.

Add a corrupt deputy, a mayor who doesn’t believe women should be in positions of power — especially Gray — and a collection of colorful and fearsome characters and Gray has her hands full.

Her situation is further complicated by the remote location of Artemis. Getting help from the Border Patrol or other agencies is a slow process, and that means she and the two officers in her department are forced to face the cartels, with their large and wella rmed armies, on their own.

“The Territory” provides plenty of thrills for readers, as well as food for thought, as it examines the problems that Mexico’s drug cartels, their wealth and their ruthlessness present for small U.S. communities along the Texas border.