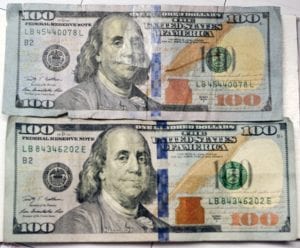 ABOVE, the Letcher County Sheriff ’s Office collected a counterfeit $100 bill last week after a local resident attempted to spend it at a store here. The bogus bill is pictured at top with a real $100 bill below it.

Residents of Letcher County are being warned to watch their money closely as they do their Christmas shopping. That $20 bill you get in change, or the $100 you’re using to buy gifts might be counterfeit.

Sheriff Mickey Stines said he got a call last week from a store that started to accept a $100 bill in payment for merchandise, but when the clerk swiped it with a counterfeit marker pen, the ink changed color.

Closer examination showed other tells, including a polyester thread that runs through real $100 bills and is printed with the phrase “USA 100” that was missing. Real $100 bills have a holographic Liberty Bell hidden inside a jug shape to the right of Benjamin Franklin’s picture, and a second portrait that can only be seen by holding the bill up against a light. The numeral 100 in the right bottom corner also changes color from orange to green when the bill is moved, but all of those features were missing from the counterfeit bill.

The most obvious difference was that the counterfeit had four tiny Chinese alphabet characters printed in red ink on the back. 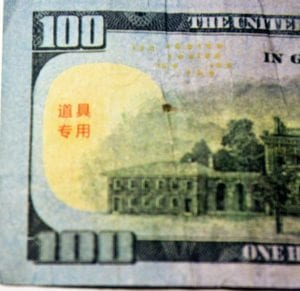 AT RIGHT, the fake $100 bill found here last week has a series of four Chinese logosyllabic characters on the back in red ink. Translated, the symbols mean “For Props,” indicating the bill might have been produced as a movie prop. (Photos by Sam Adams)

Despite those differences, it compares very favorably to smaller value bills that have been confiscated in the past.

Stines said the bill was discovered at a store in Letcher County. When the woman who passed it was told the bill was fake, she went to the car and came back with a debit card to pay so the store didn’t lose any money. The woman who had it, however, lost $100. She was questioned by police, but she wasn’t arrested because she said she didn’t know the bill was phony.

“Did she know it was counterfeit? Probably. Can we prove it in court? No.” Stines said.

Stines said he thinks the counterfeit bills are being used in the drug trade because people can’t really report to police that they got a counterfeit bill from someone who bought drugs from them. Many, however, are making their way into legitimate commerce, and aren’t noticed until someone at a store catches them.

“I would advise the businesses to tell folks it’s counterfeit, they need to pay in a different way, and call the authorities right then — don’t wait,” Stines said.

Clues that a raise suspicion of a bill’s authenticity include such things as someone buying something that costs only a dollar or two and paying with a very large bill in order to get real bills in change.