Sheriff Webb: ‘It went by fast’ 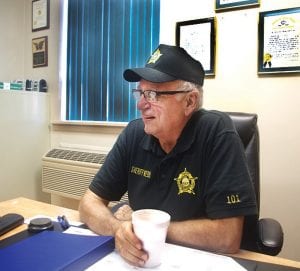 Sheriff Danny Webb shares a laugh in his office. (Photo by Sam Adams)

The first week of next month, Letcher County’s sheriff will take off his badge and retire after 46 years as state trooper and county sheriff.

Sheriff Danny Ray Webb is the only sheriff in the county’s history to have entered office as a police academy graduate, and the only one to serve more than three terms in office. Until the 1980s, Kentucky sheriffs could not succeed themselves. Webb’s 16 years in office, which began in January 2002, make him the county’s longest-serving sheriff.

“It’s been a long trip, but it went by fast,” Sheriff Danny Webb said last week.

Webb hadn’t considered being a police officer until he came home from Vietnam, and he stumbled into the profession because of his status as a veteran.

“When I got back from Vietnam, the economy was just like it is now, there weren’t any jobs here,” he said. “I decided to do like a lot of my dad’s family and I went to Ohio looking for a job.”

Webb said he wasn’t having any luck finding work at the steel mill or other plants around southern Ohio, when an uncle introduced him to the chief of police in Middletown. The chief told him being a veteran would get him a job as a police offi- cer, so he applied and headed home to Millstone. His wife and family were here, and as he drove into Hazard he noticed Kentucky State Police Post 13 on the hill overlooking the highway.

Webb applied, and KSP hired him as a cadet trooper and a camp counselor at Trooper Island. Four months later, a new academy class still hadn’t opened up, so he was placed as a driver’s license examiner. He finally entered academy in November 1971, and while he was there, the Middletown chief called to tell him he was hired there. With family and home here, Webb turned him down and when he graduated on February 25, 1972, he was assigned to Knott County.

Over the course of his career, Webb has been a Kentucky State Police trooper in the Hazard Post, a sergeant at Pikeville, a uniformed lieutenant and assistant post commander at Elizabethtown, a detective lieutenant in Hazard, post commander (captain) at Henderson, and finally post commander at Hazard. He also served as a Special Response Team leader, and investigator of officer-involved shootings before his retirement from the KSP in 2001.

Webb said his father was dying while he was in Elizabethtown, and a detective lieutenant in Hazard who was from Pikeville knew about it and asked to be transferred home. He then called Webb and told him to put in his transfer request for Hazard.

Webb’s office in the sheriff ’s department is adorned with his Honorable Discharge from the Army, his KSP retirement certificate and a certificate naming him a Colonel Aide de Camp on the Commissioner’s Staff, an honorary title given to KSP troopers and others for service to the agency or to the community. A bookshelf on one wall holds a collection of police department and federal agency coffee mugs, a fitting hobby for a man famous among his employees for making coffee they say you can stand a spoon in.

The mugs are mostly from seminars and trainings Webb attended over the years, including a homicide class taught in the New York Police Department by criminologist Dr. Henry Lee, who later became famous as an expert witness on DNA in the O.J. Simpson murder trial.

Webb said DNA testing wasn’t even in use in Kentucky at the time, but became commonplace. He used what he learned at Lee’s class and others investigating high-profile murders here, such as the Tammy Acker murder, the Judy Ann Howard murder at Alice Lloyd College, and the Castle and Marie Collins murders at Buck Creek.

Asked about the good highlights of his career, Webb was momentarily stumped.

“I think a lot about the bad things,” he said, fumbling for words. “But I got to meet all these famous people, and I got to serve the people.”

Webb said he always gave people his home telephone number if he thought they were someone who needed help, or needed someone to talk to.

“I always felt like I was a public servant, and tried to live up to my obligation as a police officer,” he said.

He said he was especially proud of the fact that he never shot anyone in 46 years of service.

“I was a pretty good hand to talk, and I was able to talk myself out of situations,” Webb said. “All the times I was with SRT and we went and arrested murderers and everything, and we never once shot anybody. Out of all the bad situations we went into, we were always able to solve them peacefully. That’s something to be proud of.”

Prone to storytelling and laughing uproariously at his own stories as he relives the moments, Webb was not all introspective. He told of being on the protection details of five presidents who visited the state and of Richard Nixon mistaking him for a security guard. He also talked of state police assigning him to protect Tommy Lee Jones and Sissy Spacek when they were in eastern Kentucky and southwestern Virginia filming Coal Miner’s Daughter, and of meeting Loretta Lynn, one of his favorite singers, during his time on the set. He was sheriff when a friend introduced him to reality TV star Ernie Brown Jr., AKA Turtleman, and his aunt in Ohio chastised him for not telling her that Turtleman was coming to see him.

“I didn’t know he was coming. I hadn’t even watched him on TV,” Webb said laughing.

And of course the Turtleman story brings up former Letcher County reality TV star Verlinn Short, known as Snakeman, whom Webb said he didn’t really get along with, but he moves quickly on to another story.

A man of a million tales, Webb launched into a tale from soon after his arrival in Vietnam. He came off duty, Webb recalled, from guarding North Vietnamese prisoners to find that his fellow soldiers had put a snake in his bunk — a deadly bamboo viper that they only thought they had killed. Webb rolled his eyes and laughed loudly at the thought of being done in by a joke.

While many people came home from Vietnam with PTSD and other problems as a result of their service, Webb credited his job with saving him from those problems.

“ I think it probably helped me that I went straight into something. Like everybody else, you have bad memories about Vietnam, but you have good memories about some of the people you’ve served with,” he said. He and more than 20 of his Army buddies still keep in touch with each other.

Now 68 years old with a replacement knee and still walking at a clip that will force those planning to keep up to trot, Webb says he’s ready to retire. His desk calendar has the days remaining in his term marked and numbered, and he says he’s looking forward to spending time with his wife Sharon, their adult sons and grandchildren.

The Webbs already have a camper at Lake Cherokee in Tennessee, and they’re planning a trip to Florida soon after his second retirement.