The Letcher County Sheriff ’s Department arrested a Mayking man on drug trafficking charges and confiscated $180,000 worth of crystal methamphetamine from his home on Bottom Fork, Sheriff Danny Webb said.

Webb, a retired state police captain who has served as sheriff for 16 years, said it is the biggest drug cache he can recall in this area.

Danny Robert “Danny Bob” Collins, 62, and his daughter, Samantha Danielle Collins, 36, were both charged with trafficking in methamphetamine. The case will be presented to a grand jury and more charges are expected. Deputies said a child under 16 was at the house when they raided it.

Samantha Collins was also being held on a felony warrant from Virginia for a probation violation.

Webb said the raid was the result of a six-month investigation by Sgt. Alicia Congleton and Deputy Sidney Fields.

Captain Barry Engle said in addition to nearly 4 pounds of meth, deputies seized 10 grams of brown heroin with an estimated street value of $3,500, about $5,000 in cash, much of it in $100 bills, four handguns and assorted drug paraphernalia.

The drugs found at the house were a pure type of methamphetamine known as ice, not the typical meth made in plastic soft-drink bottles. Police offices believe it may have been made in Mexico and smuggled into the United States.

Two other people were arrested March 1 in what police believe to be a related case in Jenkins.

Jenkins Police Officer Michael Garner made a traffic stop in downtown Jenkins on KY 805 about 7 p.m. that day, and arrested Brian Paul Broome, 41, of Little Oak Street on an outstanding warrant. Garner wrote in his citation that when Broome stepped out of the car, he set a black case on the seat and handed something to Heather Dorthea Moore, 42, of Elkhorn Ave., who seated beside him. Garner said he checked the case and found a scale with a white powdery substance and a glass vial, also containing a white powdery substance. Garner said when he searched Moore, he found another bag containing several smaller baggies containing a total of about 10 grams of crystal meth. 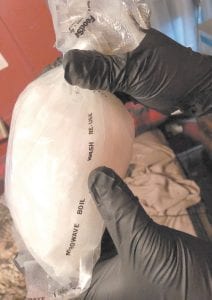 Just part of the meth haul A police officer holds up a bag filled with crystal meth after a raid at Bottom Fork on Monday. The bags are a fraction of the 1,800 grams confiscated by the Letcher County Sheriff ’s Department during a search.

Garner said he also found a metal case with six pills believed to be Xanax, and several other loose pills. After placing Moore in the backseat of his car, Garner said noticed her “moving around.” He wrote that he found a small baggie with white powder lying on the seat where she had been sitting, though he had searched the backseat of the cruiser before putting her in it.

Two others were arrested in the same incident. Barry Kinney, 37, and Emily Caudill, 21, both of Elkhorn City, were each charged with first-degree possession of a controlled substance (meth), first offense, and promoting contraband.