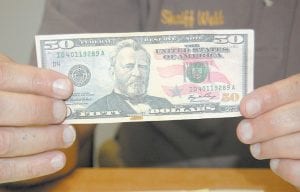 A counterfeit $50 bill was discovered at the Ermine Double Kwik Monday and police are advising people to pay close attention when exchanging money.

“We were getting them from everywhere six months ago and it just stopped,” said Letcher County Sheriff Danny Webb.

A $50 bill found at a Hazard Double Kwik on Monday was reported counterfeit to Kentucky State Police.

Webb said if people don’t have the special pens to check the bills, they can hold the money up to the light and look for the silhouette of President Ulysses S. Grant on the right side of the bill.

“That is one thing they can’t copy,” said Webb.

“Chances are they made a bunch of them with that number,” said Webb.

Whitesburg Police Offi- cer Brandon Fields said he is not surprised that a fake bill has surfaced in the county.

“With money how it is and gas prices the way they are, I am not surprised,” said Fields.