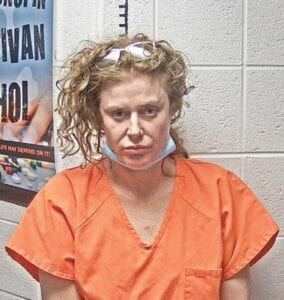 A Knott County woman was charged with trafficking in methamphetamine after deputies found her passed out in a pickup truck on Little Colley.

Deputy Sheriff Alexa Stambaugh wrote in the citation that she responded to a call of a woman passed out in a vehicle in the driveway of 1530 HWY 1148 about noon on Tuesday. When she arrived, the woman was passed out and the doors of the truck were locked. Stambaugh said she woke up Conley and asked to search her vehicle. Inside, according to the citation, she found 64 grams of methamphetamine, several Xanax pills, other unidentified pills, electronic scales, and unused plastic baggies.

Letcher County Sheriff Mickey Stines said after reading Conley her Miranda rights and continuing the search, he and Stambaugh found about $6,800 in cash.

Conley was lodged in the Letcher County Jail, where she remained Tuesday evening.

Later the same day, a woman was charged with misdemeanors after being found passed out in a vehicle in the Walmart parking lot. She was charged with public intoxication and third-degree possession of a controlled substance. Stines said that case involved Neurontin.