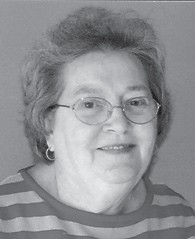 Born at Ovenfork to the late Jesse James and Renavae Craiger, she was the widow of Everett Elkins.