Shoes are worn out from dancing 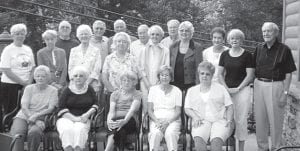 Oh, what a beautiful morning in the Harrison, Ohio area. There’s actually a little bit of coolness in the air. I sat on my porch for a little while. It is so refreshing after the hot days we have been experiencing. As I said in an earlier column, I really shouldn’t complain as other places are a lot worse than we are.

I went to the Coon Hunters Club. As usual the music was awesome as none other than Marvin Davis was there to play the fiddle for a couple of bands. If I had a preference, Marvin would have his own group so he could sing more. I understand when you are just a sort of fill-in musician you can’t do as you would like, or in this situation what the audience would like, except I did ask Bill Adams to turn Marvin Davis loose on that fiddle. Alphine Stacy and I needed no encouraging to hit the floor kicking our heels up to the tune of ‘Sally Goodin’. Actually, Bill Adams stepped off the stage with his guitar around his neck and danced with us.

I have to retire my shoes as I have worn the heels off them.

My other dancing friend, Becky Tipton, wears taps on her shoes. I don’t like them. To me, they are noisy and cumbersome. I like to feel the floor under my feet.

Marvin Davis not only picked in Bill Adams’s group, Clarence and Wanda Baker, who are a husband and wife team and fine musicians, were at Coon Hunters and asked Marvin to pick with them.

Marvin brought my special iris cuttings from his dream flower garden I had the pleasure of visiting back in spring. I had a chance once again to talk to Marvin about his interest in the iris plant. Marvin started hybridizing in the ‘80s. I was also told there are just as many men who are interested in the art of developing flowers, especially roses.

This is the first time that I have ever seen anything as beautiful and creative as these gorgeous iris blooms. Now that I have some of my own, I wish I could fast forward into next spring to see if the bulbs produce blooms, though I know sometime it takes two years for them to bloom after being transplanted.

Gwen Huff Farmer has an abundance of apples this year and she has really been busy trying to get them put away since she returned from vacation. Gwen said it finally came a good rain. I wish she would send some this way!

Once again I had an accident and really messed my right leg and foot badly. I am going to give in and go get an x-ray in the morning. My daughter Anna Nottingham gave me the dickens for not going to the doctor when I fell down a couple of steps. I have to quit drinking, or else I am going to start to see if I can stand up.

I have had a full day and not much sleep and a long night ahead of me as I am keeping my little sidekick Bennie Wiederhold tonight. Actually, I am looking forward to this except I am tired! I wonder why?

Hello to my brother Richie and Wanda Hall, my brother Jerry and Mattie Hall, Wallace Lee Hall, and my sister Loretta Church. If I have forgotten anything I will do better next week

My friend Sue Courtney and I went for a drive. We crossed the Marland Dam into Carrollton, Kentucky then came back a different way past the Kentucky Speedway.

In June and July I bought two small refrigerators at Walmart in Whitesburg. There was a $25 diff erence in the price as the first one went on sale two days after I purchased it. It took a call to Arkansas and I got the diff erence refunded. I was told at another Walmart they don’t do price adjustments from another store. It pays to be persistent.