Shooting appears to be accidental 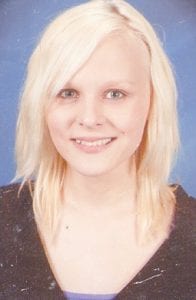 Funeral services will be held this week for a 15-year-old girl who died April 11 in what authorities believe was a tragic accident.

Services for Rachel Marie Hall, of Jackhorn, will be held at 1 p.m. on Friday at the Seco Freewill Baptist Church.

Miss Hall, a sophomore at Letcher County Central High School, died around 1:30 p.m. on Sunday after suff ering a gunshot wound to her head while visiting the Little Colley home of her boyfriend, fellow Letcher Central student Tre’ Sexton, and his parents, Billy and Debi Sexton. Little Colley is located between Sandlick and Isom.

Kentucky State Police have released little information about the case other than to say a death investigation is underway. The Mountain
Eagle
has learned from sources familiar with the case that the Sextons had driven to Jackhorn to pick up Miss Hall and were preparing to take her and their son for an outing to a lake when they heard the sound of a gunshot coming from a room where the family’s firearms are kept. The Sextons then discovered that Miss Hall, who sources say was in the room alone at the time the shot was fired, had been shot.

An investigator who asked not to be identified believes Miss Hall thought the gun, a Glock .40-caliber pistol, was unloaded when she picked it up. The magazine which holds the gun’s bullets was in an adjoining room at the time of the shooting, the investigator said. Glock pistols generally are not equipped with a “magazine disconnect” safety that would have kept a single bullet from being in the gun’s chamber.

An autopsy has been conducted in Frankfort, as has testing for gunshot residue. Results of tests performed during the autopsy are expected within two weeks.

Miss Hall is being remembered by family members and friends for her sense of humor, nice smile and sense of loyalty to her friends.

“Personality wise she was the happiest person you would ever meet,” said Miss Hall’s older sister, Pearl Hall. “She could swim like a fish. She loved Bob Seger. She loved clothes.”

“She was the sweetest person you would ever meet,” said Krystal Fleming, a friend of the Hall family. “She loved life. She had everything going for her.”

“I don’t think she realized how many lives she touched,” said Stacey Quillen, an English teacher at LCCHS. “What has struck me most through all of this is how much her friends have enjoyed her and appreciated her. Her friends have commented that that is what they miss about her, her sense of humor.”

“She was just a girl who really enjoyed life and was a really good friend to her friends,” said Quillen.

Glenda Fleming, secretary at Fleming-Neon Elementary School, said Miss Hall was shy during grade school but tried out for cheerleading in middle school and “came out of her shyness some.”

“She was just a real quiet, friendly child,” said Fleming. “She was never a discipline problem. She always had a smile. She was a rather popular little girl in elementary school.”

Miss Hall was crowned homecoming football queen in 1997 as an eighthgrade student at FNES.

“The kids always liked her,” said Fleming. “She was one of those kids that you just sort of take to.”

In the 2007-2008 FNES yearbook under Hall’s photograph is a list of some of her favorite things — chocolate, cinnamon, polka dots, and bubble gum.

LCCHS Principal Stephen Boggs said the school off ered grief counseling this week, with about a dozen students using those services by the end of the school day on Tuesday.

“They are understanding, grasping what has happened,” said Quillen. “It’s just not the same without her.”

“She is the most amazing, beautiful person I know,” said Pearl Hall. “Now she is my guardian angel. I hope she has fun in heaven. I love her and miss her until the day I am with her.”

Visitation is set for after 11 a.m. today (Wednesday) and all day Thursday at the Seco Freewill Baptist Church. Burial will be in the Hall family cemetery in Jackhorn.