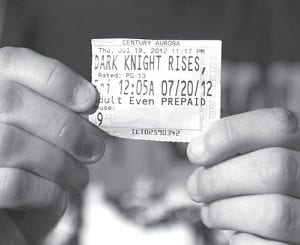 Director Christopher Nolan remarked ahead of “The Dark Knight Rises” debut that his villain is so fearsome that at times he’s as hateful as someone carrying out such misdeeds for real.

Nolan’s grand spectacle of violence and mayhem has been put into perspective for what it really is — a harmless thrill ride — after the real horror of the Colorado shootings that killed 12 and injured 58 at a screening of his Batman finale early last Friday.

Movie theaters are supposed to be shelters where we can live out our dreams — and yes, even our nightmares, with stories of disaster, apocalypse, terror and villainy unspooling to the crunch of popcorn and the slurp of oversized sodas.

Some in the audience at a midnight show of “The Dark Knight Rises” in Aurora, Colo., thought at first that it was part of the show when a man in a gas mask burst into view, lobbed a gas canister, and then opened fire. They quickly realized the danger was no longer on screen but right in their midst.

“I believe movies are one of the great American art forms and the shared experience of watching a story unfold on screen is an important and joyful pastime,” filmmaker Nolan said in a statement about the shootings. “The movie theater is my home, and the idea that someone would violate that innocent and hopeful place in such an unbearably savage way is devastating to me.”

The millions seeing the blockbuster in-the-making over opening weekend no doubt share Nolan’s sentiment that a safe haven has been breached. Movie theaters have been the scenes of scattered violence, but despite the carnage audiences witness on screen in big action films, viewers go in expecting nothing worse than maybe getting stuck next to people talking or texting during the show.

“That corner of our lives has kind of been blown open,” said Stephen Bates of Long Beach, Calif., who came in a Batman T-shirt to an IMAX cinema in Los Angeles to catch a “Dark Knight Rises” matinee. “The movie theater is a special place.”

Formidable security is common at other venues where masses of people congregate in tight spaces — sports events, concerts, nightclubs. At the movies, the big concern generally is policing R-rated films to make sure those under 17 are not sneaking in without an adult.

Theaters ramped up security after the shootings and are reviewing what else they need to do to make cinemas safer.

“ We live in a violent world, unfortunately, and I think we’ve been very fortunate over the years that movie theaters have not been targeted,” said Patrick Corcoran, spokesman for the National Association of Theatre Owners. “This is the first incident like this that we’ve ever had. Any other bits of violence that have occurred in movie theaters have usually been between patrons.”

Among recent incidents: a man shot a noisy moviegoer in the arm in 2008 at a screening of “The Curious Case of Benjamin Button” in Philadelphia; in Eugene, Ore., in 2009, a man shot himself to death during a showing of “Watchmen”; a teenager required six stitches after he was stabbed in the stomach in a quarrel with a security guard at a Long Island cinema after a screening of “My Bloody Valentine” in 2009; and last year, a man was shot to death in a theater in Latvia after an argument with another audience member watching “Black Swan.”

Police in Aurora, said 24-year-old James Holmes opened fire in a theater shortly after midnight, when “The Dark Knight Rises” debuted in about 4,000 cinemas nationwide. The film is the finale in director Nolan’s trilogy, which began with 2005’s “Batman Begins” and continued with 2008’s “The Dark Knight,” a film whose domestic opening weekend of $158.4 million was a record at the time.

“The Dark Knight” won a posthumous Academy Award for Heath Ledger as the Joker and elevated the superhero genre to new critical heights with its mix of action and weighty themes. “The Dark Knight Rises” continues the epic sweep as Batman (Christian Bale) battles a merciless brute named Bane (Tom Hardy) who lays siege to Gotham City, including attacks on a packed football arena and a stock exchange.

The appearance of the gunman at the Aurora theater must have been truly disorienting for the audience watching the masked Bane carry out his slaughter. Wearing a gas mask, a ballistic helmet and vest and carrying a semi-automatic rifle, a shotgun and two pistols, Holmes appeared silhouetted against the movie screen and began shooting.

After “The Dark Knight,” Ledger’s cackling, anarchic Joker was a tough act to follow, and Nolan went in the opposite direction with Bane, a bad guy with chillingly precise plans to make the innocent of Gotham City suffer. Nolan said Hardy, who co-starred in the filmmaker’s 2010 sci-fi hit “Inception,” completely embraced the detached menace of Bane.

“There are moments in this film where I just find him absolutely hateful and terrifying in a way that movie antagonists very rarely are,” Nolan said in a July 7 interview. “They’re usually very much more sold out to the attractive qualities of villainy, and there are moments in here where you hate him the way you’d hate someone in real life if they were doing these things.”

Yet in the safe environment of a theater, with the action happening to fictional figures on screen, fans can revel in such violence, watch the world as they know it destroyed in such movies as “The Day After Tomorrow” or “2012,” and see supernatural creatures spreading terror in vampire and zombie flicks. Afterward, fans head home unscathed, marveling at what they’ve seen and unconsciously, maybe, having worked through some primal issues.

It’s a cathartic experience that dates back to the earliest storytelling, said Tom Pollard, professor of social sciences at National University in San Jose, Calif., and author of “Hollywood 9/11: Superheroes, Supervillains, and Super Disasters,” a study of big-screen action and violence since the Sept. 11, 2001, terrorist attacks.

“You go back to Sophocles with Oedipus wandering around with his eyes gouged out by himself because he’s been having sex with his mother. ‘Hamlet,’ where the whole stage is awash with blood and suicide,” Pollard said. “It’s a part of our culture. It does express these monsters from the id, the dark side of our psychology. These films symbolize deep fears, and it can be a kind of therapy to see them.”

Fans seeing “The Dark Knight Rises” around the country expressed horror over the shootings, but many said they felt it was an isolated incident that would not keep them from going to the movies.

Still, the violence was bound to weigh on their minds as a terrible incursion on what is meant to be escapist fun, the simple joy of watching a whole other world unfold before your eyes without consequence to the audience.

“You go into this movie, you watch it, you get engrossed into this story and you don’t think about the outside world for two, three hours,” said Samantha Hines, who saw the movie in Boston. “So it is jarring to have such a harsh reality just slammed upon everybody like that.”