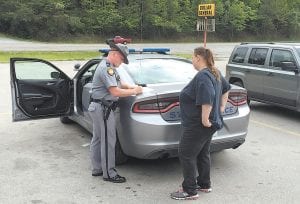 Shoplifting turned into a more serious crime Saturday after a 31-year-old Letcher County male threw a store clerk to the ground after he fled from the scene at Mayking. In photo above, Kentucky State Police Trooper Scott Caudill gathered information from a Dollar General Store manager after she was knocked to the ground after a suspect identified as Tim Wright ran from the store to avoid arrest. The incident occurred after the clerk allegedly caught Wright stealing two Red Bull energy drinks and other items. Determined to stop Wright, the store manager stood behind a silver Toyota automobile in which Wright had been riding, refusing to allow the vehicle’s middle aged driver and elderly occupant leave until police arrived. Trooper Caudill later identified Wright and arrested him at a Neon home. Wright is charged with shoplifting and fourth-degree assault. (Eagle photo)