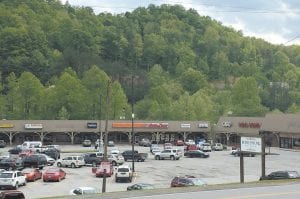 TO BE SOLD MAY 24 — Letcher Circuit Judge James W. Craft II has ordered the Whitesburg Plaza Shopping Center at Ermine to be sold at auction to settle a $4.5 million debt owed by the property owner.

Letcher Circuit Judge James W. Craft III ordered the scheduled May 24 sale of the Whitesburg Plaza Shopping Center at Ermine after ruling that the shopping center’s owners, Whitesburg Realty LLC and Jeffrey C. Ruttenberg, are in default to lender Life Insurance Company of the Southwest in the amount of $4,473,158.

The shopping center, built in the early 1980s with 21,270 square feet of retail space, is anchored by Walmart and is home to tenants including Little Caesars, Reflections Hair Salon, Jumbo House Chinese Restaurant, Appalachian Wireless, AutoZone, Shoe Show and Cato’s. In a complaint filed in Letcher Circuit Court in February 2016, Life Insurance Company of the Southwest, a private firm based in Montpelier, Vermont, Lexington-based Whitesburg Realty and Ruttenberg, also of Lexington, entered into a promissory note with Life Insurance for $4,425,000 on December 21, 2007, with final payment scheduled for January 10, 2018.

Finding there “is no genuine issue as to any material fact and that Life Insurance Company of the Southwest is entitled to judgment as a matter of law,” Craft ruled in a summary judgment last month that the property “shall be immediately referred to the Master Commissioner of this Court for sale.” e master commissioner Th for Letcher County is Whitesburg attorney Daniel F. Dotson, who began advertising the property for sale this in a legal advertisement in The Mountain Eagle (see Page B5).

Craft’s order says that before the property is sold, Dotson will have it appraised “by two intelligent disinterested housekeepers of Letcher County, not related to any parties of this action.”