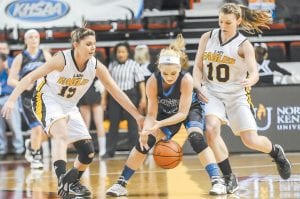 Bailey Daniel’s steal and layup with 5.5 seconds left helped Johnson Central rally for a 62-60 win over Letcher County Central in the opening round of the girls’ Sweet 16 tournament last week in Bowling Green.

Johnson Central (22-11) trailed by as many as eight points in the second half before pulling even 58-58 on a Daniel layup with 1:19 left.

After both teams added two free throws, Daniel stole the ball at midcourt and went in for the uncontested layup.

Letcher County Central (18-11) had a chance to win the March 12 contest, but Cheyanna Stidham’s 3 from the right wing was short, giving Johnson Central its first win in nine tries in the Sweet 16.

Kristina Bentley led Letcher County Central with 25 points, while Stidham and Courtney Brock had 13 points each. 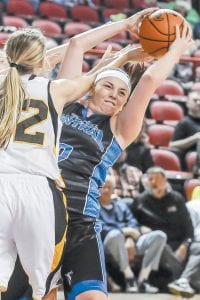 Injuries and a short bench finally caught up with the Lady Cougars in the opening round of the Girls’ Sweet 16 Tournament in Bowling Green, with their 62-60 loss to the Johnson Central Lady Golden Eagles.

Johnson Central, the champions of the 15th Region, trailed by eight points, 49-41, with 6:01 left to play, but rallied behind junior guard Bailey Daniel for their firstever state tournament victory.

With Brock on the bench, LCCHS struggled against the Lady Golden Eagles’ relentless defensive pressure. LCCHS, which led 17-16 after the first quarter, committed seven turnovers in the second quarter but still managed to hang on to the lead 27-24 at the half.

Bailey Daniel, who entered the game averaging 13 points per game, had been held to just three points in the first half but she took over the game for Johnson Central in the second half — scoring six points in the third quarter and 16 down the stretch including a steal and layup in the final 10 seconds that gave Johnson Central the 62- 60 win.

Despite Bailey Daniel’s offensive fireworks, LCCHS refused to give up the lead in the second half until Daniel’s steal in the final seconds.

Senior guard Cheyanne Stidham, who led LCCHS offensively in the first half with 12 points, received a lot of defensive attention in the second half and finished with 14 points.

Senior forward Kristina Bentley, who had eight points in the first half, carried the Lady Cougars in the second half and finished with 24 points and eight rebounds. In the third quarter, Bentley’s postup gave LCCHS a 38-30 lead at the 1:59 mark.

The Lady Cougars led 43-39 going into the last quarter and extended their lead out to 49-41 on senior forward Kelly Adams’s free throw line jumper with 6:01 left to play setting up Bailey Daniel’s heroics. Over the final six minutes, Daniel scored 16 of the Lady Golden Eagles’ final 21 points.

10 in the second half. Johnson Central also came up with 11 steals — including the steal in the final seconds that gave it the victory.

Johnson Central shot 44 percent by making 20 of 46 field goal attempts. The Lady Golden Eagles made 14 turnovers — eight in the second half.