Should alcoholics get new livers? 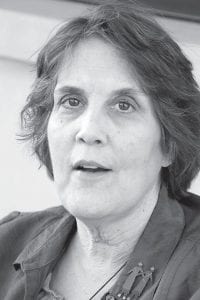 Jane Sussman, a pre-school teacher from Cambridge, Mass., has been waiting for a liver transplant for more than a year. She does not want heavy drinkers to be added to the waiting list for organs. (AP Photo)

Some gravely ill alcoholics who need a liver transplant shouldn’t have to prove they can stay sober for six months to get one, doctors say in a study that could intensify the debate over whether those who destroy their organs by drinking deserve new ones.

In the small French study, the vast majority of the patients who got a liver without the wait stopped drinking after their surgery and were sober years later. The study involved patients who were suffering from alcohol-related hepatitis so severe that they were unlikely to survive a six-month delay.

The findings, reported in the New England Journal of Medicine, could boost demand for livers, already in scarce supply, and reopen a bitter dispute over whether alcoholics should even get transplants.

Alcohol can cause lethal, liver-destroying diseases such as cirrhosis and hepatitis. Nearly one in five liver transplants in the U.S. go to current or former heavy drinkers. Transplant hospitals commonly require patients waiting for a new liver to give up drinking for six months as a way of assuring doctors they are serious about staying sober after the operation.

Drinkers severely ill with hepatitis account for a very small share of patients needing transplants. The French study suggests that dropping the six-month rule for these patients would increase demand for livers by only about 3 percent.

The study’s lead author, Dr. Philippe Mathurin of Huriez Hospital in Lille, France, said a strict application of the six-month rule may be unfair to such patients. He said they are just as deserving as other liver patients, many of whom have diseases caused by poor lifestyle choices such as drug use or obesity.

Mathurin said he favors keeping the rule for other alcoholics with liver disease, noting that some can recover liver function simply by staying sober.

Dr. Robert S. Brown Jr., transplant director of New York-Presbyterian Hospital/ Columbia University Medical Center, agreed it is time to rethink the six-month rule. “The challenge of this paper is to come up with better ways, both to treat alcoholism as a disease and to predict who will succeed with transplantation,” he said.

Mathurin acknowledged that such a change could put more patients on the waiting list for organs, and said: “ It means we have to increase the number of donors.”

Nearly 6,300 liver transplants were performed last year in the United States, but more than 1,400 Americans died waiting for a new liver, according to the United Network for Organ Sharing. Adding more people to the list could mean longer waits and more deaths among non-drinkers.

Preschool teacher Jane Sussman, 59, has been waiting for a liver for more than a year. Doctors aren’t sure what caused her liver condition, but it wasn’t alcohol and she has never been a drinker. She doesn’t want the list to get longer by adding more alcoholics.

“Who knows for sure if they’re not going to start drinking right way?” Sussman said from her temporary home in Pittsburgh near her transplant hospital. An organ from a deceased donor is “the most amazing gift you’ll get in your life. If you don’t treat it right, it’s a wasted gift that could have gone to someone else, like myself.”

The French study involved 26 alcoholics with severe hepatitis who were not getting better with drug treatment. They were carefully selected: Among other things, all had support from family or friends. The patients pledged to quit drinking and received transplants. They were compared with a group of similar liver disease patients who weren’t offered transplants.

Not surprisingly, those who got transplants did better: 77 percent were still alive six months later, compared with 23 percent of those who didn’t get new livers.

Also, far fewer fell off the wagon than expected: Only three of the transplant patients started drinking again two to three years later, a rate much lower than the estimated 30 percent relapse rate in general among alcoholic patients who meet the six-month sobriety rule.

Dr. Christopher Hughes, director of liver transplantation at University of Pittsburgh Medical Center, said he is worried the pool of potential organ donors could shrink if the public believes organs are going to active drinkers.

“I think this will be very controversial. I don’t think you’ll find a lot of support for adopting this,” Hughes said.